As I have mentioned association football was a late arrival in Exeter. Alongside St Lukes and the military it was in Schools that association football developed – for example Exeter Grammer School and Park School in St Leonards. And here in Heavitree, Regent’s Park School and Collingwood House School. But by 1888 nowhere in the city was there an ordinary football club – made up of local residents. Until that is the arrival of an energetic Scotsman and our next grave of interest in the cemetery.

Aleaxander Stuart was an architect who moved to Exeter from Scotland in his early 30s. He lived in College Road with his wife and three small children. When in Scotland he had played a leading role in the Scottish Football Association so naturally on arrival in Exeter he looked to get involved. Except there was nothing to get involved in. No clubs outside the schools, colleges and military.

So, Stuart set about setting something up. In 1889 he helped organise an Exeter XI and games were played against Crediton and the South Staffs Regiment. Stuart played in goal against the soldiers who won 13-1. This heavy defeat seemed to slow down the idea of an all Exeter team and Stuart decided to a go more local in his approach. He was a sidesman at St Mathews Church in Newtown and the vicar there Reverend Ponting was keen on providing physical outlets for local youths. Thus in October 1889 it was announced that St Mathews Association Football Club had been formed. The club played at Whipton Lane where the Pleasure Gardens are today.

It was the first civilian football club in the city. Stuart was the first Secretary although he indicated this would only be temporary as he had decided to get involved with rugby locally too.

Nevertheless in the 1891-2 season attempts were once again made to set up an all Exeter team – a move that was making progress when Exeter sport was hit by a devastating event – the death of Alexander Stuart aged just 35. It is suggested that he had overdone his sporting commitments (he was by now secretary of the Devon Rugby Football Union and on English Rugby’s governing body). He succumbed to typhoid fever and died on 23 November 1891. The Exeter Flying Post said “a deep gloom was cast over a large section of the community”. He was buried 3 days later here in Higher Cemetery.

Stuart’s legacy was that association football was up and running in Exeter and it wasn’t long before the city had a team – Exeter Association – who on 6 October 1894 played the first known football match at St James Park. They beat Minehead 3-0 – the game that Reg Davey played in. The Somerset side complained the grass was too long. The first excuse for a defeat at the ground. 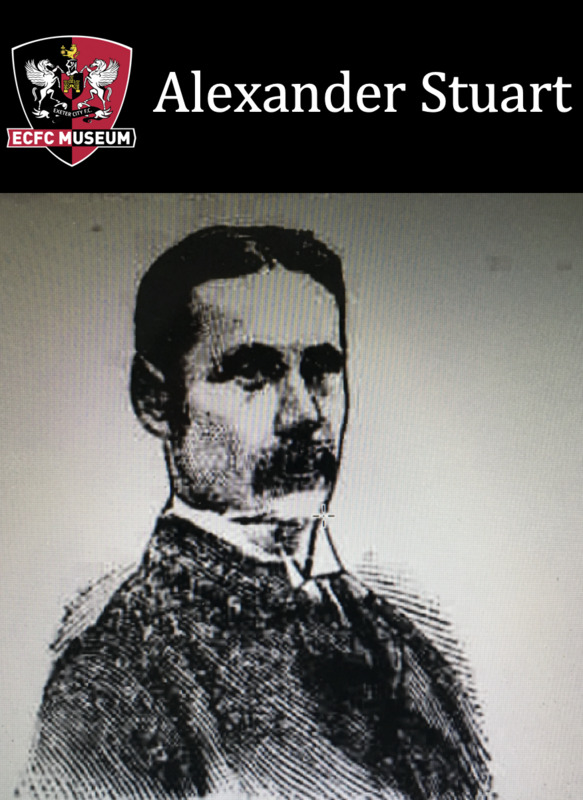