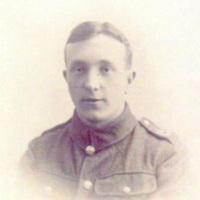 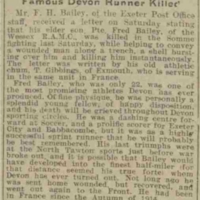 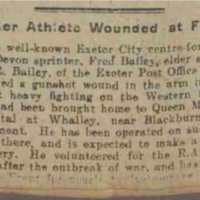 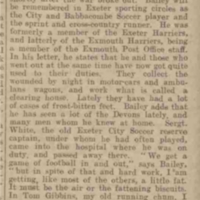 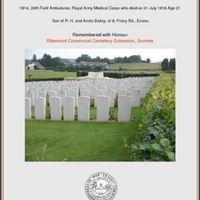 I have Fredericks medals & dogtags as well as his Memorial Plaque or "Death Penny" as it was known. Frederick is remembered on the 24th Field Ambulance plaque in the Cathedral, also in his local Church in Heavitree, on the War Memorial at Exmouth, and one other place in Exmouth that i can´t remember. He will always be remembered in our family, my Great Aunt visited Freds grave in 1926, my late Father visited the grave in 1956 and i plan to visit "before i shuffle off my mortal coil".

I know that Fred was born at 56 Sandford Rd, Newtown, Exeter. His Father, Robert Henry Bailey was at this time, a "Letter Carrier" (Postman), his Mother Annie Bailey was a Milliner (hatmaker) in Exeter. The family grew in size and moved to a larger house at 28 Mansfield Rd, the family moved again and found a house at 9 Priory Rd. At the time of the 1911 census the family was Robert Henry Bailey, born 1865... his wife Annie Bailey, born 1867 -  the children were Lucy born 1892, Frederick born 1894, Charles born 1898, Florence Winifred born 1901, Beatrice born 1905 & Vera born 1908. Robert Henry Bailey ended his carrier as an Inspector of Postmen in Exeter in 1925 and he was awarded a medal from the King for long service to the Post Office (which i also have in my colection)  Robert died in 1946, and Annie died in 1949 both passed in St Austell, Cornwall.