The Squad photo from the 1913/14 season where Exeter finished 12th in the Southern League, Division One, and made it to the Second Round of the FA Cup. It is not proposed, at this stage, to go into any long story about the prospects of Exeter City's reconstructed team, for the discussion of prospects before the serious work begins is all a somewhat futile undertaking. Reading some of the lengthy columns which are written at this time of the year on clubs' prospects, it becomes clear that the guessing at prospects is a very hazardous business. Lost newspapers which circulate over wide areas devote several columns to contributions from their correspondents at all the football centres; each correspondent deals with the outlook before the particular club in his centre, and the percentage of clubs who are expected, according to those correspondents, to win their respective Leagues, and have a big say in the Cup, works out at about ninety!
Suffice to say that, on paper, there is a "likely" look about the new Exeter City team. The defence, at any rate, appears to be remarkably solid, though Strettle's ability is being accepted on his past record rather than what he has done in the trials. At centre-forward, of course, Lovett has his spurs still to win, and unless he makes some remarkable advance, it does not appear as if the Grecians will be any stronger in this position than they have been in the past. Indeed, except on the right wing, where Kirby and Whittaker should prove as strong as any pair in the League, there is a good deal of the speculative character about the City attack, so much so, in fact, as to cause one to hesitate before assuming that it will be as good as last year's.
The defence is likely to be better than last season's, but the attack, on the other hand, may prove either very good or quite ordinary

One thing about the men Mr Chadwick has got together for 1913-14 can, whatever else is disputed, be said with certainty, namely, that there are absolutely no "rabbits" among them. None of the new men will be so much money in wages thrown away, and few managers pick up a considerable number of new players in the summer and get no "passengers". Exeter had a passenger last year, in Clay. There is no player of his utter lack of promise on the books at the present moment. Indeed, of the Plymouth League side, it is quite likely that it will be a better reserve string than Exeter City has ever had. For instance, there are worse defences even in Southern League first teams today than Loram; Goddard, Harding; Smith, Lagan, and Marshall.What the City Management need to be principally concerned about is the maintaining of a good feeling that permits of no jarring note, a feeling that is based on contentment. Mr McGahey was quite right when he suggested that "Esprit de Corps" was the City's most useful player last year; it is to be hoped that he has signed on again.

Whilst Exeter City do not hold such an exalted position in the Southern League table as last season, the club has never on any previous occasion finished a campaign more settled or with better and brighter prospects. They have dropped from the seventh to the twelfth position in the League table, and the number of goals they have scored is fewer than any other club in the League, with the exception of Merthyr Town, who have scored one less. These facts naturally indicate that the present constitution of the team is not all that could be desired, and undoubtedly fresh blood will have to be introduced if the record is to be improved upon during next season.
Re-signing has commenced, and it is understood that Mr. Chadwick is in search of new players. Exeter's weakness in attack has been admitted on all sides, and with the exception of Whittaker and McCann the team does not possess what might be termed a. goalscoring forward. McCann has been the most consistent forward, and comes next to Whittaker in the matter of goalscoring, but he has not signified his intention of remaining at Exeter. If he does not, the directors will have difficulty in finding an equal substitute.

Only 38 League goals have been scored, - nine less than in the previous season - and of these Whittaker, with 13, and McCann, with 10, have obtained 23, but six fewer goals have been let in. Twice as many games have been drawn, and the number of matches lost was the same as last season. Generally, by far the best performances of the City have taken place away from home, and the one outstanding game being. the Cup-tie at Fratton Park against Portsmouth, which will be looked back upon with pride for many years to come. There have been exceptions, however, at St. James's Park, notably against the celebrated Aston Villa, when the Grecians gave one of the best displays in their history, and were praised to the skies by London newspapers.

The Promise of Smith.

One of the chief features of the team has been the consistency of the intermediate line, and if the whole of the half-backs are retained no anxiety need be felt in that department. Smith has no doubt caught the eye more than the others, for once having settled in and secured a regular place he very quickly came to be regarded as the most promising player on the City's books.
Lagan and Pratt at the central positions, and Rigby, the captain, on the other flank, have all done great service, and have been signed on for a further season. Fort and Strettle could probably not be improved upon, and it is to be hoped that the former will remain with the club.

The small number of goals which Pym has let pass indicates his worth, and he has shown himself to be a goalkeeper of far more than ordinary ability. Furthermore, he was discovered almost on Exeter City's doorstep, so to speak, playing for Topsham.
Financially the season has been a record one. The "gates" from matches in the Southern League have shown a great improvement, and the Plymouth and District League games have also been fairly well patronised.

EXETER CITY FOR THE ARGENTINE

The average Southern League gates have been greatly in excess of any previous season, whilst the club also did well out of the Cup Competition. The result is that the bank overdraft has been reduced from £1,500 to £600, which means the saving of a large part of the annual drain for interest and charges. But there is yet to be paid certain transfer fees on two or three players.
In previous years the directors were always faced with the difficulty of having to start each season with a fresh team owing to the lack of means to pay summer wages. This great disadvantage has happily been removed this year, in consequence of Exeter City having been chosen to represent the League on an Argentine tour, from which, too, some amount of profit may be anticipated.

Thus the team's defence, one of the strongest in the League, has been retained intact, whilst the following five forwards have also been re-signed: Holt, Lovett, Whittaker, Marshall, and Goodwin, and Mr. Chadwick, the manager, is at present in the
North on the search for others.

The Supporters Club, which has frequently rendered considerable monetary assistance (by the promotion of social functions and other events) has decided to make a further donation of £100 towards the summer wages fund.

FULL STEAM AHEAD
City Players Embark for the Argentine:

Exeter City Football Team sailed from Southampton, on May 22nd, on the "Andes" for their tour in the Argentine, which will extend over three months. The party were looking forward with pleasurable anticipation to the trip. Mr Thomas, with Mr Norman, travelled with the party to Southampton to wish them "bon voyage". As previously announced, eight matches will be played, including six against representative sides of the Argentine Football Association.

Most of the games will take place in Buenos Ayres, and matches at Rosario and Rio de Janeiro on the way back, will enter into the tour. The party is in charge of Mr. McGahey, with two of the other directors, Messrs. Parkhouse and Middleweek. The whole of the fifteen players embarked:- Pym, Loram, Fort, Strettle, Harding, Rigby, Lagan, Pratt, Smith, Marshall, Holt, Lovett, Whittaker, Goodwin, and Hunter, recently secured from Clapton Orient.
The party leave the Argentine on July 13th, arriving at Liverpool on the "Drina" on August 4th. 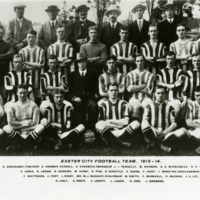 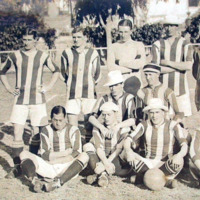 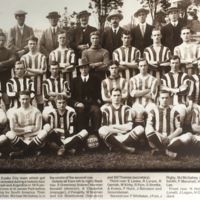 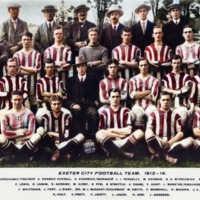