In the summer of 1914 Exeter City made history, being the first English football club to undertake a tour of South America. This unique honour was bestowed upon the City by the League, that body making the selection at the conclusion of the 1913-14 season, and Exeter City were chosen, according to the League, as a club that was typical of English football. The Exeter City party consisted of the following directors and players, numbering seventeen in all: Messrs McGahey, Parkhouse, and Middleweek, directors; J.Fort, F.Goodwin, A. Harding, H. Holt, W.Hunter, J.Lagan, R.Loram, W.Lovett, F.Marshall, C.Pratt, R.Pym, J.Rigby, W.Smith, S.Strettle, and F.Whittaker. They embarked from Southampton on May 22nd and after playing five matches in the Argentine and three in Brazil, and undergoing some unexpected and exciting experiences (of which more later) arrived in England, at Liverpool, to be precise, on August 9th, just one month before they were due to play their first League match of the new season.

ADVENTURE ON THE HIGH SEAS: Fears were entertained for a few days that Exeter City would be without a League team this season, as nearly the whole of their players were on the sea returning from their Argentine tour when hostilities broke out, and consequently ran the risk of capture by the enemy or being held up at some port or other. But they have come safely through, arriving at Exeter on August 10th.

News that England was at war was received at Madeira, and the remainder of the voyage was most exciting, the ship, the Royal Mail steam packet "Alcantara," proceeding at night with all lights out, as previously described in the statement given by Mr M.J.McGahey.
It is considered by the officials that the tour has been most beneficial in all ways. It not only enabled the directors to retain the services of nearly the whole of last year's side, but has also served to bring about a most valuable understanding with Hunter, who is probably the most important of the new players engaged, for he was included in the tour party.

Of last season's players, fifteen have been re-engaged, together with three of the amateurs, Hunt, Lewis, and Pridham, while Cox, of the Devon Regiment, who played for the reserves on quite a number of occasions in 1913-14, is again available. Of the others, Kirby and Lee left the club as far back as October, the former joining Merthyr Town, whilst Lee returned home on account of the death of his father, and it is not known locally whether or not he has since played. Goddard went to West Ham in December in exchange for Fred Goodwin, whilst McCann was transferred to Bristol Rovers, Orr to Barry, and Brooksbank to Bristol City.

Former Grecians who have changed clubs include Bulcock, Crystal Palace to Swansea Town, whose manager now is Walter ("Big Walt") Whittaker, and Griffiths, Clapton Orient to Llanelly. It would appear from these moves that South Wales holds a big attraction for ex-Grecians.

The new engagements number six, comprising W.Hunter, a bustling, energetic centre-forward from Clapton Orient, and previously with Manchester United; W.Brown, a full-back, late of Rossendale club; William Goodwin, from Blackburn Rovers; Alfred Victor Green, like Goodwin, a centre-forward, from Rotherham Town; John Dockray, an outside-left, from Bury; and S.W.Cowie, an outside or inside right, from Blackpool. Exeter ended this season 11th in the Southern League Division One and lost in the First Round of the FA Cup to Aston Villa.

A total of exactly fifty goals was scored in the League matches, as follows:-
W. Goodwin 23, Green and Lovett, each 7, Holt 4, F.Goodwin 3, Dockray 2, Evans, Hunter, Rigby, each 1, Butler of Plymouth Argyle 1 (own goal). Green and Lovett each scored 1 in the Southern Charity Cup matches.

WHERE THEY PLAYED: LEAGUE MATCHES

*   West Ham United elected to the 1919-20 Football League.
** Croydon Common relegated to Division Two, but did not rejoin league after the First World War. 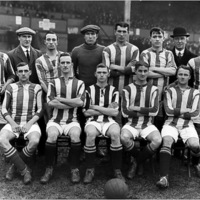 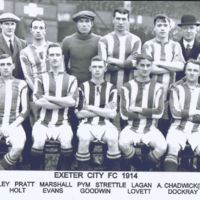