PROSPECTS OF THE EXETER ASSOCIATION CLUB

During the past few years "soccer" has made vast strides in the County, but this has mainly been brought about by the starting of the Plymouth Argyle team. Since the inauguaration of that team, sides have sprung up all over the County and especially at Exeter.

The Exeter City team when they were first started were known as St Sidwells, and the majority of the players came from the top of the City, but last season they were known as the Exeter City team, and their play was the means of drawing good gates to the St James Park, where all the home matches are played. Last season the club entered the East Devon League only and they easily secured the cup and medals for coming out on top. Of course the chief man of the team was the Rev E Reid who formerly played for Swindon. He did a lot towards securing the position the Club held at the end of the season.

The success attained by the Club last year has induced them to enter for the Devon Senior Cup during the coming season, and followers of the dribbling code in the city will be pleased to learn that an excellent set of fixtures has been already arranged.

In a chat with Mr S Thomas the hon sec of the City club, our representative gleaned the information that next season they will be stronger than ever. Up to the present no fewer than 60 players have signed on for them, and many more are expected to do so, so that the club will in no way suffer for lack of Reserves. The signature of the Rev Reid has again been secured, as has also that of Brooks (who played for Tavistock last season) Clarke (of Taunton) Sturge (of Exmouth) and Light and Budden the two Devon Cricket professionals.

Last saturday the Club held a practise match and as showing the interest in soccer it may be stated that three or four good sides could have been selected from the players present. During the coming season W Morgan will continue to act as captain, whilst the duties of the Vice-Captain have devolved upon the shoulders of S. Andrews.

The season however opens proper on September 9th, when Turnchapel, a club which made its name in the Plymouth District, will oppose the City club at St James Park.

At present home and away fixtures have been arranged with the Plymouth Argyle Reserves team and these matches will be in connection with the Devon Senior Cup competition, and the 48th Company RGA will meet the City club on two occasions.

Taken on the whole the outlook for the City club is brighter than it has been since the commencement of the Club, and citizens will have no cause for complaint of the bill of fare provided for them at St James Park.

The second XI have entered the East Devon League and at the close of the season they do not anticipate being far off the leaders. The Resrves played in the East Devon Senior League. 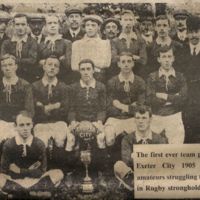 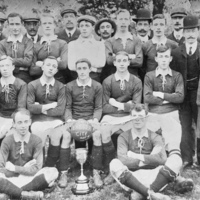 The Cup was the East Devon Snr League Cup. George Russell's medal was given to me when died.