Cyrus had just one season with Exeter City following his release by Crystal Palace in July 1997. A product of the Palace youth system, Cyrus was given a full contract in August 1995 and made one league outing for them.

Never a regular first team player at St James’ Park, Cyrus made his debut for the Grecians on the opening day of the 1997-98 season against Hartlepool United.

He linked up with Dulwich Hamlet for the start of 1998-99. Moved to Hampton and Richmond in 2002, and was playing for St Leonard's, Stamcroft the following season and played for Carshalton Athletic in 2004/05. 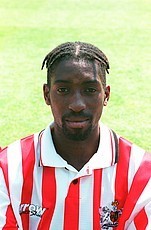