EXETER CITY AND THE SOUTHERN LEAGUE.

The projected "Exeter City" professional club evidently meets with the approval of some of the most influential members of the Southern League, judging from the fact that when a public meeting was held in the city it was attended by Mr N.Whittaker, (secretary), Mr J.B. Skeggs (Millwall), Mr Louis Crabbe (Plymouth Argyle), and Mr E.Arnfield (Southampton), whilst promises of support have also been received from others with respect to the application by Exeter for admission to the 1st Division. This special favour is due to the fact that the club will be the means of opening up a large new district, and furnish a mid way link in the 120 miles separating Bristol and Plymouth, while metropolitan teams will not need an overnight journey to visit Exeter. The promoters of the new club can already satisfy the requirements as to suitability of ground and the possession of sound financial support, and it only remains to select a strong team from the 200 odd candidates who are seeking engagements in all parts of the country to render the club first favourite for admission.


The Management Committee of the Southern League met on Friday, May 1st, at the Charterhouse Hotel, London, and arrived at the important decision to hold their annual meeting on the same day and at the same hour as that of the English League, May 29th. This action has been taken to force the hands of Tottenham and Queen's Park Rangers. The resolution also entirely shuts Bradford Park Avenue out of the Southern League, and it is understood that if they are not admitted to the English League they will probably go in for the North-Eastern League. It is also rumoured that if the 'Spurs and the Rangers have no success at the English League meeting they will be directed to the 2nd Division of the Southern competition, in regard to which automatic promotion will probably be in force next season. Mr Syd Thomas, Secretary of Exeter City, was present at Friday's meeting in London. When he returned he made the announcement to the effect that the old International who has been engaged as a coach and general adviser to the City Club is Arthur Chadwick.

BEST CENTRE HALF IN ENGLAND.

It is scarcely necessary to remind Soccer enthusiasts that this famous old player was with Accrington, Burton Swifts, Portsmouth, Southampton, and Northampton, and was in his day the best centre half in England. He is a Lancastrian by birth, and when he came down to Exeter on a recent occasion, journeyed from the Accrington district. Chadwick has always been recognised as one of the most gentlemanly types of professional footballer. A full team of first-class men will have been signed on by the City Directors by next Friday night, and Exeter will therefore go to the annual meeting of the Southern League (this has never been done before by new applicants) with a team all ready for the fray and absolutely engaged.

Mr Norman Kendall has returned from a lengthy tour amongst many of the Directorates of Southern League clubs, and reports from every centre the most gratifying encouragement.

This morning Mr Thomas received a letter from Arthur Chadwick, professional coach and adviser to the Directors of the Exeter City Football and Athletic Company, in which he stated that he came to final arrangements yesterday for signing on as players (professional) for the proposed Southern League team one back, two halves, a centre-forward, an inside-right and an inside left. These are all Lancashire players, and no names were mentioned, while the League "papers" were not sent on by him, for Chadwick, owing to his travelling during the last few days, not receiving the Club's official forms and agreements till late yesterday. Today Mr Chadwick is in Manchester, and the first batch of forms are expected by Mr Thomas from the coach's home in Accrington by an early post. Last night at Exeter, final arrangements were come to with the left or centre half, Wake, late of Newcastle and the Argyle. It may be mentioned that Wake is 22, and 5 ft 9 ins in height, and the fact that he is a man who would be readily "snapped up" is proved by offers he already had from Liverpool and Norwich.

The prospectus of the Company, which has now been passed in its final form by the Emergency Committee of the F. A., is to be published on Monday, and today all the Southern League clubs had been supplied with a lengthy printed form in green and white - the Club's colours - setting forth the possibilities of Exeter and the district of Fast Devon, the finances, the team, and the ground. The facilities offered by the G. W. Railway and the L. and S.W. Railway are made a prominent point of, and a time-table has been prepared, showing the different Clubs the times that they could leave their headquarters and arrive in Exeter, and vice-versa. A map of the district is also included, showing that the Exeter City Club would have no professional opposition over an area containing a population of 250,000.

Mr S.Thomas this morning received notification from Mr Arthur Chadwick, who is still in Manchester building up Exeter City's proposed Southern League team, that the following men have been signed on, and that he would have further signatures to forward tomorrow.

Top of the Poll.

The annual meeting of the Southern Football League was held at 9.30 this morning at the Charterhouse Hotel, London, under the Chairmanship of Mr Lewis, of Swindon Town. Mr Walton, of Queen's Park Rangers, announced at the outset that his Club had withdrawn their application for the English League. Mr Skeggs, of Millwall, moved that Tottenham Hots and the Rangers be excluded from the Southern League under Rule 8. Mr Skeggs said that the Southern League did not intend to be "played with," and the two clubs had had fair and good notice of what would happen in the event of their not withdrawing their application from the English League. Mr Moss, of West Ham, seconded, and said that if the Southern League did not take action they would become a laughing stock. The resolution of exclusion was carried by an overwhelming maj ority, and the 'Spurs and Rangers representatives then retired from the room.

Mr Whittaker, secretary, announced that there were now five vacancies and six applicants, namely: Leyton and New Brompton, who retire automatically, Exeter City, Croydon, Southend United and Coventry City. A letter had been received from Hastings to the effect that they had withdrawn their application for entry to the 1st Division in view of future automatic promotion.

The Queen's Park Rangers secretary asked to be allowed with the rest of the applicants to make application, and a motion was proposed to go into Committee to discuss the position. Mr Skeggs pleaded for publicity in discussion, and the motion was at once withdrawn.
Mr Green, of Luton Town, moved that the Rangers be allowed to make a new application, but by 11 votes to 7 the meeting was in favour of going on to the next business.
Representatives of the six applicants were then heard in the following order:


The latter, who made a good
impression by his report on the team and ground, remarked that Exeter had the assistance of the Great Western Railway, and if elected would ever be loyal to the Southern League. In answer to the Chairman, he said if Exeter were not elected to Division I, he could not say if they would join Division II; that would depend upon the constitution of the latter. Mr Skeggs afterwards said he hoped Croydon's offer to defray the visiting Clubs' expenses the first season would not have an influence on the voting. He disapproved of the suggestion. Thereafter, the vote was taken, the result of which was as follows:

REVIEW OF THE SITUATION.

Before the meeting started the situation was freely discussed and it was known that the Rangers had climbed down in respect to the English League application. Messrs McGahey, Kendall, Harvey, and Thomas were amongst the early arrivals at Charterhouse, smiling and confident as ever. The result of the ballot has fully justified their optimism. Exeter's position at the top of the poll was rather unexpected, but extremely popular all round, and there was scarcely a dele gate but congratulated with handshakes the City representatives. Mr Crabbe, of the Argyle, in particular did not disguise his delight.

Exeter's rapid rise in the football world is being spoken of as wonderful, and it is a record which is not likely to be met or broken for many long years. Mr McGahey did Exeter a lot of good among the delegates last night in London, and made the City's position positively sure. Few questions were asked Mr Norman Kendall at this morning's meeting, compared to those put to other clubs, showing that the delegates were quite satisfied with Exeter's position. Croydon being a syndicate and not a registered Company greatly spoiled their chances. 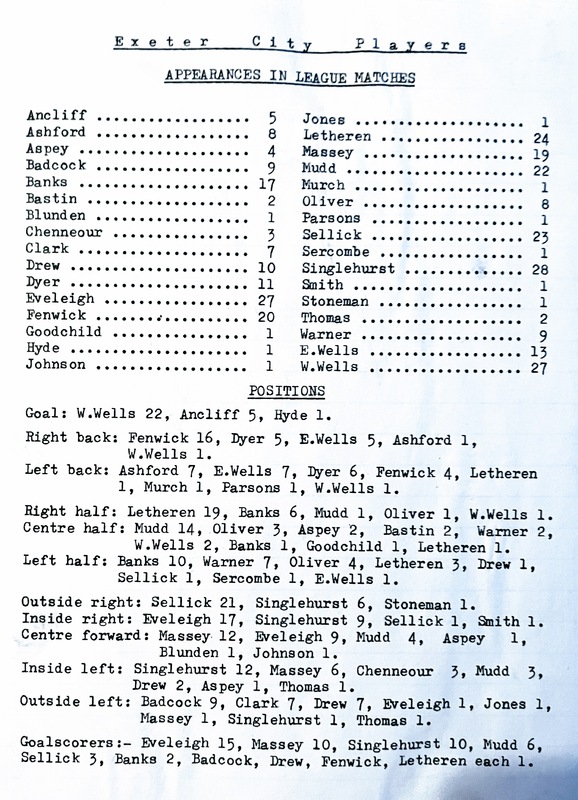