Ditchburn, nicknamed ‘Jock’ moved to Scotland at the age of three, his parents being Scottish, and thus started his career in junior football with Blantyre Thistle in the Lanarkshire League.

He was signed by Sunderland in 1923 and during his three season stay played six league matches for the Roker Park club. Ditchburn then signed for Exeter City in the summer of 1926.

His debut came in a 3-0 home win over Merthyr Town in August 1926. Although he played 50 league matches in two seasons for the Grecians, he was not retained for the 1928-29 season. He continued to live in Exeter though and worked for the Southern Railway.

After playing for Exeter Loco in the local Wednesday League, the Grecians’ re-signed Ditchburn in November 1928 and he continued to serve the club for a further four seasons, although he was hampered by a series of knee injuries.

When he retired from playing he continued to live in Exeter and worked locally on the railways. Ditchburn died in January 1992. 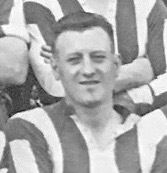