Alexander was born in 1908. As well as representing the Nottingham and County schools teams, Sheffield was also capped by England schools level.

He was working as a clerk in the London, Midland and Scottish Railway Company office in Nottingham when he signed professional roms for Shirebrook in the Midland league as a 17-year-old.

After one season with Shirebook, Sheffield signed for Mansfield Town in 1926. He moved to Exeter City in the summer of 1928 and made his league debut for the Grecians against Newport County in March 1929.

Retained for the following season, when Sheffield appeared in 12 Third Division South matches for Exeter, he left to join Bristol City for 1930-31, but didn’t play a league game for them.

After one season at Ashton Gate, Sheffield signed for Rochdale, but once again he didn’t make a league outing. 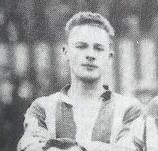