The Grecians announced they would play four pre-season friendlies against Bristol  Rovers , Taunton Town, Tiverton Town and Truro City.
Supporters were only permitted to attend the Tiverton Town match.

Exeter City began their 2020/21 pre-season campaign with a 2-1 defeat at Bristol Rovers. An early goal from the home side in each half helped the hosts on the way to victory, despite a consolation strike from Tom Parkes

Jayden Mitchell Lawson opened the scoring inside 90 seconds of the first half, while less than 60 seconds of second period had elapsed when Cameron Hargreaves doubled the lead. Parkes smashed in at the near post minutes later but it wasn’t enough for the Grecians.

Boss Matt Taylor new signings Jake Caprice and Rory McArdle in the starting line up at the Memorial Stadium for the game, which after some consideration of a four-quartered game, took place as a regular 90 minute fixture. Bristol Rovers took the lead in the proceedings inside two minutes when Mitchell-Lawson latched onto a Hargreaves cross in the six yard box and knocked the ball past Lewis Ward. It was an early blow for the Grecians, but they should have levelled within minutes, but Ryan Bowman’s bullet header was tipped over the bar by Anssi Jaakola in the Gas net.

The game had all the hallmarks of a pre-season game but, after a drink’s break, City improved. Archie Collins was having a good half and he fed in Jake Taylor with a good ball over the top, Bowman again had a great chance when he took down McArdle’s header in the six-yard box but couldn’t quite control it, allowing Jaakola to come out and gather,The second half saw Josh Key come on at right back in place of Caprice but there was a similar start as the first as Rovers struck early to double their lead. The goal came from a sweet strike from Hargreaves as he cut inside and smashed the ball past Ward and into the top corner. It wasn’t long though before City found a way back into the game though as Tom Parkes volleyed the ball in via the post after a deflection off a Rovers man fell kindly to him. Game on at the Memorial Stadium. There was a marked improvement from City thereon as they battled for an equaliser and Taylor soon wrung the changes. Nicky Law, Pierce Sweeney, Alex Fisher, Joel Randall and Harry Kite were all brought onto the field for their first minutes of pre-season. Shortly after, Jonny Maxted, Jordan Dyer, Alex Hartridge, Nicky Ajose and an unnamed trialist were also added to the field. The new look line up picked up where their predecessors left off and continued to put pressure on the Pirates’ defence. City were given a good opportunity to level when Ajose was felled on the edge of the area, but the trialist could only smash the ball just a tad too left to hit the target.M Maxted had to be quick off his line to deny James Daly after some neat footwork, before the same once again caused City some problems in the area. At the other end, Jordi van Stappershoef – who has replaced Jaakola midway through the half – was forced to get low and deny Randall’s powerful drive from the edge of the box. City weren’t able to equalise and their pre-season campaign ended in defeat.

21st August 2020
Exeter City v Taunton Town
Played at the Cat and Fiddle.
Exeter 1-1 Taunton
Holmes scored for Taunton after 11 mins and Alex Fisher equalised for the Grecians after 75 minutes.

Exeter City ended pre-season with a 3-2 win over Truro City at Cliff Hill. Ryan Bowman’s brace and Matt Jay’s first half effort sealed victory for Matt Taylor’s side, who were almost punished by two Tyler Harvey goals – one in each half.
By Craig Bratt

Taylor named a strong starting line up against the Cornish side and they started with some intensity. Jake Taylor’s whipped cross found the boot of Bowman, but former Grecian James Hamon produced a stunning save to prevent an early opener. Hamon was on hands again shortly after to deny Randell Williams, as he palmed away a fierce effort from the edge of the box. City’s pressure paid as Matt Jay struck his second goal of the week as he latched on to Nicky Law’s pass to fire into the bottom corner to give his side the lead. They continued to pile on the pressure but couldn’t find a second goal, and were punished. Truro eventually got a foothold in the match and after a nice passing move found an equaliser through the prolific Harvey. A fine run down the left saw the ball played into Harvey, who took a touch before placing the ball past Ward with a curled finished. As the rain continued to lash down at Cliff Hill, the conditions made it difficult for both sides, neither of whom could find a lead before the break. It didn’t take long after the restart for City to regain their lead, as Bowman emphatically beat Hamon with a fine finish. It was poor defending from Truro, who allowed Bowman plenty of space on the edge of the area and he made no mistake. Nicky Law could have made it three for the Grecians when he did well to beat three men on the edge of the box, but his effort grazed the side netting after he was forced out wide before taking the shot. City then had a third ruled out for offside after some good build up play from Williams and Bowman. There was then a huge double chance for City as Jake Taylor’s header hit the post, before Bowman’s follow up shot was brilliantly saved by Hamon, who had had a good game in the Truro net. Truro found an equaliser with 15 minutes remaining as Harvey doubled his and the Cornish side’s tally. City failed to clear their lines in the penalty area and were made to pay when he stabbed home from close range. City sealed victory at the death when Bowman rose to head in to an empty net after a fantastic cross into the area from Jack Sparkes.. 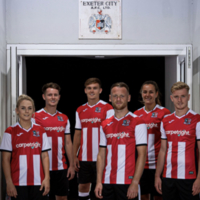 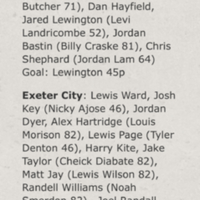 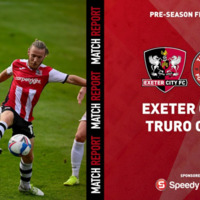