Exeter City's home league campaign started with defeat as they were beaten 2-0 by Port Vale at St James Park.
By Lorcan Hankin

A stunning free-kick from Tom Conlon and a composed finish from Devante Rodney secured the three points for an impressive Valiants side, with City struggling to make any real chances count in the final third.

Coming into this fixture, Port Vale were on a nine game unbeaten league run, which started back in January with a 3-1 victory over Exeter City. They today extended that to 10 games and two wins out of two in the 2020/2021 season. The Grecians however suffer their first league defeat at St James Park since September 2019.

The Grecians started on the front foot, and in the 6th minute, an inviting ball over the top from Archie Collins forced Port Vale defender Leon Legge into a mistake in which Ryan Bowman nearly capitalised on. But Legge stood firm and made his presence felt, sending Ryan Bowman flying to the floor, in which the ref saw no problem with. City started to link up well with some neat passes down the left flank, with Lewis Page in particular making some positive runs forward, but the final ball wasn’t there. Port Vale then nearly opened the scoring when Worrall’s dangerous cross met Conlon, whose header and shot at the back stick was blocked by the City defence. The Grecians had a chance minutes later when Matt Jay made a marauding run down the pitch and delivered a floating cross into the captain Jake Taylor, but his effort was volleyed over the bar. A foul by Collins on former Grecian Manny Oyeleke gave Port Vale a free kick in a dangerous position, and up stepped Conlon to produce a real moment of magic. His pinpoint free-kick found the upper top right corner of the net, leaving Lewis Ward with no chance what so ever.  City struggled to react from this, with Port Vale looking comfortable on the ball and having a couple of decent chances through Mark Cullen. City then started to link up well again, with Ryan Bowman beating the offside trap after being played through by  Jay, but Vale keeper Scott Brown produced a stunning 1 on 1 save to keep his side in front. This was the story of the half for City. Positive build-up play, but lacked the finishing touches in the final third. City started the second half brightly and had another penalty shout dismissed when Taylor went down in the penalty area, after a quick ball into his feet by Collins. Again, City was struggling in the final third, with Legge and Bowman battling fiercely. Taylor had a chance when Bowman’s cross found him, but Vale’s defence proved up to the challenge and his shot was blocked. Vale nearly doubled their lead when the second ball wasn’t won in the air after a Rory McArdle header, leaving Mark Cullen unmarked in the box, but he couldn’t get onto the end of the ball. The second goal of the game did come soon later when Collins appeared to be fouled and was dispossessed on the halfway line. The impressive Devante Rodney was played through and he kept his composure to slot past the on-rushing Ward who could only get a hand to it.  City’s best chances of the second half came in the last ten minutes of the match, both through Ben Seymour. The first chance came after a brilliant cross by Joel Randall to an unmarked Seymour in the box, but he couldn’t get a solid connection with the ball and it went wide. His second chance came when smart play from Collins found Bowman who crossed into Seymour, but his shot was somehow saved point blank by Brown who deflected the shot onto the bar with his foot. 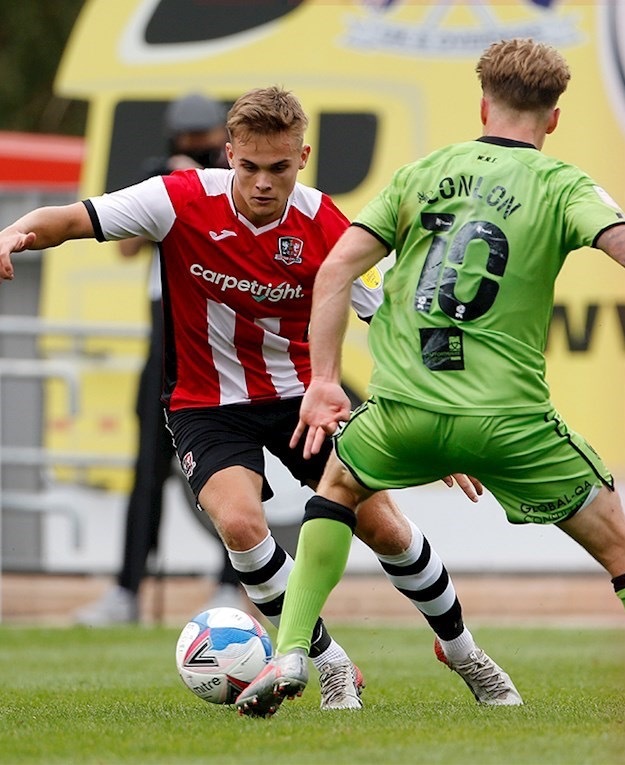