Exeter City picked up their second win in the EFL Trophy Group stages with a 4-3 win over Swindon at the County Ground.
by Jasmin Western

It was Exeter who came away with the three points in the 7-goal thriller under the lights at League One Swindon Town.

In a week where the Exeter City Academy has been given so much praise, Manager Matt Taylor named 5 academy players in the 11 changes to the starting 11, with a further 5 on the bench including call ups from the Under 18s. It only took until the 4th minute of the first half for City to get off the mark. Jack Sparkes sent the ball into the box from a corner kick, but Swindon could only clear as far as Harry Kite who struck an absolute wonder goal from outside the box to score his first competitive goal for the club. Hartridge was quickly back in his stride after his injury over preseason with a near goal-line clearance to deny Swindon a quick equaliser. However, the Grecians quickly made it 2 as Ben Seymour converted a penalty kick to also score his first competitive goal for the club. The penalty was given against Swindon as Jack Sparkes was taken down in the box by Hallam Hope. City could have made it three inside 15 minutes with Fisher unable to get a head to Nicky Ajose’s deep cross into the box. The same could be said in the 21st minute with Ajose finding space on the wing and finding Fisher again in the box. The link up play between the two senior pros was a constant threat to the Swindon defence for the entire game as both players fight for their spot in the League Starting XI.

Pressure from Exeter continued until Swindon’s first real chance of the game came in the 26th minute as Hallam Hope played a low cross into Tyler Smith, who sent the effort just wide of the Exeter goal. The mounting pressure from the Swindon attack saw another chance go wide as Rob Hunt’s half volley hit the woodwork from a Joel Grant flick on Swindon did manage to beat Exeter keeper Jonny Maxted, as Tyler Smith converted the rebound from Hope’s saved chance, but the offside flag was shown by the assistant. Another deep ball from Ajose whipped in from the byline that’s flashed off the cross bar as Seymour attempts to bury Exeter’s third home his second of the evening. Despite bodies in the box, an Exeter man was not able to sweep up the ball. It was another fantastic save from Maxted just before the break tipping the shot from Jaiyesimi over the bar to ensure City went into half-time with all the goals. It only took until 4 minutes after the break for Jaiyesimi to create first real chance for either side in the second half. The Swindon winger picked the ball up from 20 yards, but his left footed strike landed in the empty Town End rather than the back of the net. It was Swindon’s goalkeeper who had the brightest start to the second half with a string of saves to deny Exeter a third early on in the second half. With Exeter’s brightest of these chances came from Ajose’s ball through to Fisher that ended up comfortably in the hands of the Swindon Goalkeeper. Swindon began to mount the pressure on the young City defence and eventually broke the deadlock with Tyler Smith connecting on the end of Jaiyesimi’s cross to bring them back in contention. The celebrations were short-lived with Exeter’s quick response as Atangana scores from Ajose’s corner, heading it into the back of the Swindon net for the third of the night. Exeter quickly made it four with yet another corner into the box, confusing the Swindon defence and leading to Exeter’s fourth, slotted away by Alex Hartridge, adding a goal to his assured defensive performance. Despite not being able to clear the first or second ball from a Swindon’s free kick, Fisher eventually dealt with the ball with a cheeky dummy clearance to hoof the ball up the pitch and keep Exeter in the lead. The Fisher/Ajose link up play continued to create chances with another missed chance from Fisher at close range, Swindon tried to make it quick to counter through the multi-ball system, but only as far as Sparkes to deny them leaving their own half. Caprice’s improving fitness showed on 83 minutes with a fantastic run down the flank to create yet another chance for the Grecians who we’re looking dangerous against a tiring Swindon side. Despite a cracking save from Johnny Maxted, it was only enough to clear to the feet of Tyler Smith who smashed in the rebound from Jack Payne’s chance, keeping Swindon’s hopes of getting something out of this game alive. Quickly, it could have been three as Swindon as Payne shoots just wide of the Exeter goal. It wasn’t until the second minute of added time that Swindon got the third, despite mounting pressure. Despite an impressive strike from distance from Town’s Matty Palmer, it wasn’t enough to get something out of the game for Swindon as the Full-Time whistle blew shortly after. Exeter go into their final game of the EFL Trophy group stage against West Brom U21’s on November 17, with at least a draw needed to see Exeter into the knockout stages. 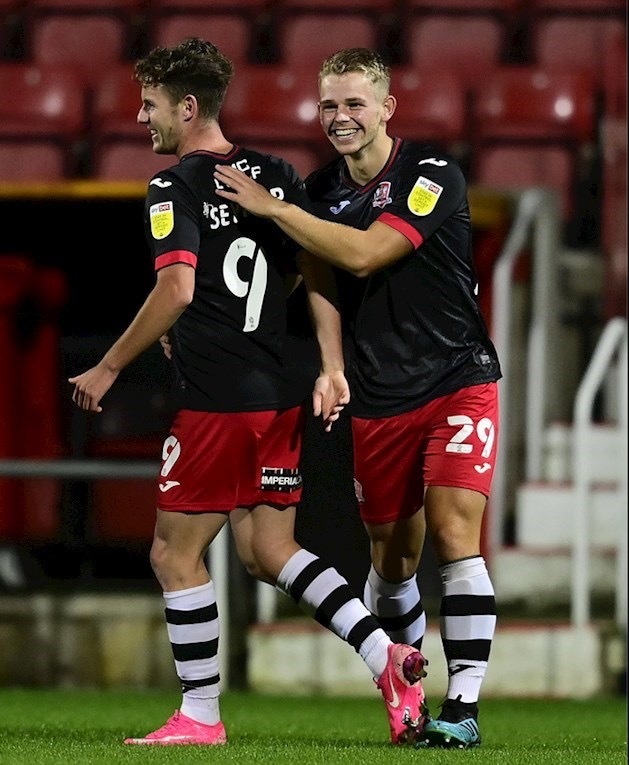