By Simon Larkins
Alex Fisher scored a wonder goal with virtually the final kick of the game to earn Exeter City a point at Roots Hall.

The Grecians twice fell behind to a Southend United side looking for their first win of the season but battled back to claim a point in stoppage time.

Manager Matt Taylor, on the back of last Saturday’s win Cambridge United, named an unchanged side for the third Sky Bet League Two match running. The only change was on the bench where Nicky Law, who did not travel through illness, was replaced by Nicky Ajose. Former City player and Southend boss Mark Molesley made six changes from the side that lost 3-0 at home to Portsmouth in the EFL Trophy on Tuesday night. There was also a debut for Kazalah Sterling. City started the match brightly with the ball finding Randall in the box after 20 seconds, but he couldn’t sort out his feet quickly enough to get a shot on target, and then Jay curled a free kick wide from 20 yards out. However Southend, who were battling hard in midfield, came into the game as the half wore on and took the lead after 26 minutes when they worked the ball from the right to Brandon Goodship, who took a touch to steady himself before sending a left-foot strike into the bottom corner. City tried to hit back as Randell Williams had a shot blocked on the edge of the area, but it was a mistake from Southend on halfway that saw City get back on terms as they squandered possession and Ryan Bowman slipped a pass into Joel Randall, who coolly found the bottom corner. The Grecians began the second half on top as well, holding onto possession better and getting the likes of Archie Collins, Jake Taylor and Matt Jay on the ball in and around the box. Jay forced a good save out of Mark Oxley and then Bowman headed just over. However, then, against the run of play, Southend were awarded a penalty when Lewis Page bundled over Sterling in the box allowing Jason Demetriou to score from 12 yards. After that City struggled to create chances, with only a Jake Taylor shot from the edge of the box – on his 250thappearance for the Grecians – warming the gloves of Oxley. So, Matt Taylor looked to his bench and brought on both Ben Seymour and Fisher to try and changes things. And it was Fisher who scored the equaliser in the last minute of stoppage time. It was virtually the last kick of the game when Fisher picked the ball up 20 yards from goal and curled a unstoppable shot into the top corner of the net with his weaker foot. 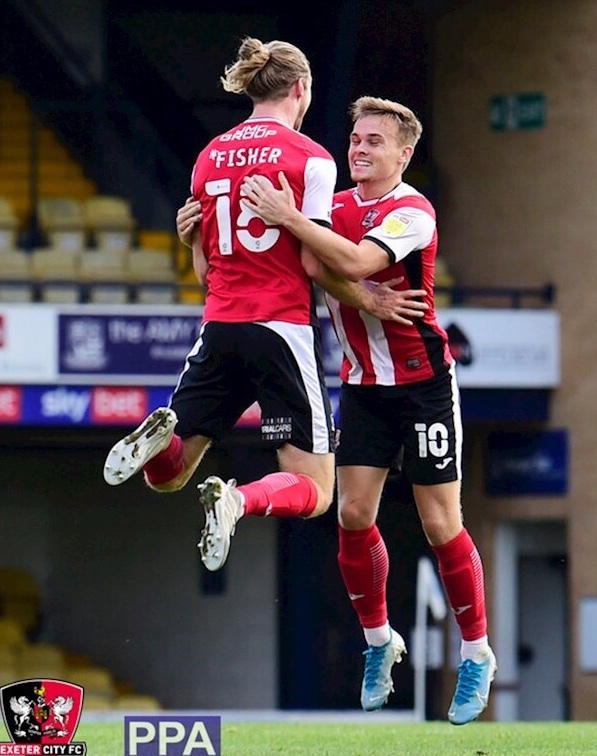