Exeter City made it six games unbeaten in the league, after convincingly beating Scunthorpe United 3-1 at a wet St. James Park.
by Lorcan Hankin

Joel Randall and Matt Jay both netted their fourth goals on the season, with Jake Taylor scoring on 90 minutes to bag in back to back games, and secure the three points for City. Exeter have lost just one of their last 15 league games at St. James Park and were looking to stretch their unbeaten league run to six matches, with a chance to move into the automatic promotion spots ahead of the 3 pm kick-offs.

Matt Taylor made five changes from the midweek victory against Crawley Town. Ryan Bowman returned to the starting line-up, Archie Collins took the captain’s armband and Harry Kite made his first league debut for the Grecians, with eight academy graduates making the matchday squad. Scunthorpe haven’t had the best start to the league campaign, having lost each of their last four matches. This wasn’t helped when two of their players tested positive for COVID-19, with a further three members of the squad having to self-isolate. Goalkeeping coach Paul Musselwhite had to manage the squad, with first-team manager Neil Cox watching remotely due to coming into close contact with the assistant manager, who tested positive for COVID-19 earlier in the week. City started the brighter side, with Josh Key making strong runs down the right-hand side but his crosses didn’t trouble the Scunthorpe defence. As the rain started to fall on St. James Park, the Grecians were controlling possession but struggling to make any meaningful chances in tough conditions. Joel Randall was getting in behind, but again the crosses didn’t faze Scunthorpe at the back. United did have a good chance against the run of play when a floating cross found striker Aaron Jarvis unmarked in the box, but his header went just wide of Lewis Ward’s goal. City soon regained control of the game, with neat passing football between youngsters Collins and Kite. Randell Williams made a good run infield, but his low driven shot from range was taken with ease by Howard. Williams had another chance on 25 minutes when his header from the outside of the box nearly found its way into the top-left corner of the goal, but Howard tipped it over for a corner. Exeter’s hard work soon paid off, in a move which started with good defensive work from Key. He found Williams down the line, who helped it on to Matt Jay whose cross missed Ryan Bowman in the middle, but found Randall free at the back post to calmly slot in his fourth of the season. City then doubled their lead moments later, when Jack Sparkes cross looked to be collected with ease from Howard in goal. Instead, the ball was dropped by the keeper right into the path of Matt Jay, who to smashed home his fourth of the season as well. Scunthorpe had a chance to get one back just before half time when Ward couldn’t clear a corner, but the follow-up shot was blocked by a sea of City bodies. United started the second half strongly and had a golden chance when Devarn Green’s shot from the edge of the box whistled over the bar. City quickly went down the other end, and Williams curling cross found Bowman unmarked in the area but his header was somehow saved brilliantly by the outstretched glove of Howard. Making up for his error earlier on and keeping the score 2-0. United looked a revitalised side and soon to find a way back into the game, after Jai Rowe’s towering header in the box from a corner found its way into the back of the City net.

The next quarter of an hour saw neither side take real control of the game, with the ball spending the majority of the game in the air and any meaningful chances coming few and far between. Scunthorpe was looking for an equaliser with 10 minutes from the end, having possession in some good areas, however, the City defence stood firm. Myles Hippolyte found himself in space inside the box, but his shot was straight at Ward. The Grecians nearly wrapped up the game two minutes from the end when Collins’ curling effort from 25 yards out was tipped around the post by Howard. Key nearly headed in the resulting corner at the near post, but again Howard was there to keep it out. City did secure the three points on the 90th-minute mark when a quick throw from Williams was misjudged by the defender and found Taylor in the box who smashed in from a tight angle. 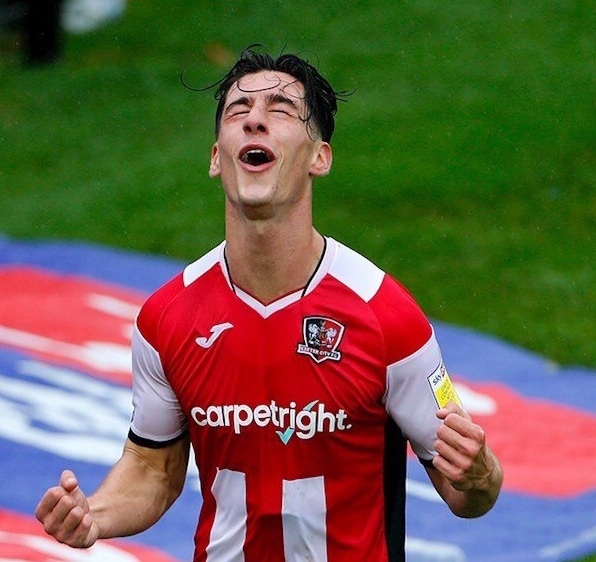