Exeter City leave East London with a point after Jake Taylor’s second half equaliser under the lights.
by Jasmin Western

Manager Matt Taylor named four changes to the side that claimed victory against Scunthorpe on Saturday. Just three and a half hours after his emergency loan signing was announced, Icelandic goalkeeper Jökull Andrésson made his professional debut for Exeter City.

City immediately started bright with Matt Jay to getting a shot on goal inside the area, but it could only get to the hands of Orient goalkeeper Vigouroux, with Jake Taylor flashing another chance across goal moments later. Despite a bright start from the Grecians, it was Orient who got off the mark first as Craig Clay crossed it into the Exeter City box for Conor Wilkinson to tap in at the far post to see Orient up 1-0 after just 4 minutes. Orient’s early goal filled the side with confidence, with Jobi McAnuff fancying himself for a second with an effort from outside the box in the thirteenth minute but it was just wide of the City goal. City had a good chance at nineteen minutes, gaining a free kick wide on the left side of the pitch. The free kick, swung in by Sparkes, made it to Cisse to clear but he scuppered it, landing at Williams’ feet who couldn’t make anything of it and it rolled into the hands of the keeper. City’s mounting pressure continued as Collins picked up a loose ball in the Orient half only to be fouled, earning a free kick in a dangerous position just outside the box. It was Matt Jay over the free kick, shooting on target but straight to into the arms of Vigouroux. Moments later it was another signature drive from midfield by Collins. Key beats his man and lays it off to Jay, forcing Vigouroux into a difficult save taking it out for a corner for Exeter. Thirty minutes in, Maguire-Drew flashed a powerful strike just over the crossbar after some skill from Brophy to set him up and finding some space outside the Exeter City box. After a foul by Sparkes on the by-line, Orient had a dangerous free kick deep in the Exeter half. It was taken well by Maguire-Drew who’s inswinger tested Andrésson who got a hand to it, sending the ball out for a corner. It only took two minutes of the second half for Exeter to get one back as Key played the ball in for Jake Taylor to smash it home on the half volley, making it 3 in 3 from the Exeter City Captain. Much like Orient in the first half, the goal putting a fire behind the Grecians. City had a prolonged spell of pressure inside the Orient half in the moments after Jake’s strike as the O’s just couldn’t seem to clear the ball far enough to release themselves of the threat of an Exeter goal. It was close to as it got to second at sixty minutes as Key struck low, sending the ball just wide of goal after a capitalising on a defensive error in the Orient back line. Orient substitute Louis Dennis almost made it two with his first touch off the bench, but he couldn’t quite get his head to the dangerous ball played into the box by Maguire-Drew as the ball sailed out of play for a goal kick. As both teams worked hard in the closing twenty minutes of the game in some end to end play. Much of this was in Exeter’s favour, with the Orient back line stringing together several defensive clearances to try and deny Exeter a winner.

Andrésson showed his assurance as he came out to punch away the free kick taken by Maguire-Drew as he attempted to deliver a cross into the box in the eighty-third minute. The Grecians got a late free kick as Cisse took Joel Randall out on the halfway line and was booked after holding onto the ball as Key tried to retrieve quickly. Unfortunately, it was too little too late for the boys as the final whistle was blown. 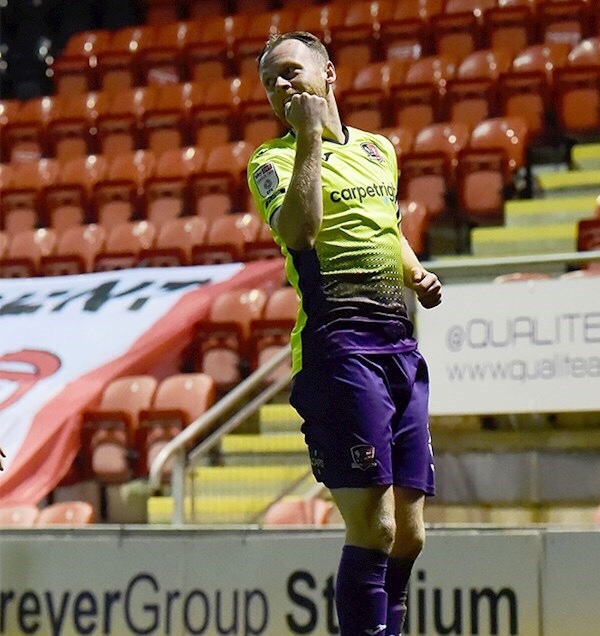