Exeter start November as they ended October as they retain their unbeaten record away from home.
By Jasmin Western

Exeter City travel back to Devon with a point in hand after a second half recovery thanks to captain Jake Taylor, scoring his fourth in five matches

Manager Matt Taylor named one change to the side that beat Carlisle 1-0 at home on Saturday as the Grecians looked to make a positive start to November after being unbeaten in October.

Pierce Sweeney was named in the Exeter side for his 150th league appearance for the Grecians and Matt Jay came back into the starting line up under the lights at the Mazuma Stadium. It could have been 1-0 early doors with Exeter, earning a freekick in a dangerous position in outside the Morecambe box. Williams fired the ball into the box. The first ball wasn’t dealt with, but Morecambe pulled off a goal line clearance to deny an early lead for the Grecians. Another chance came from the Grecians at 7 minutes with a long ball into Randell who squares to Matt Jay, but he can only get as far as the hands of the Morecambe keeper. Some nice pressure from Joel Randall denied a Morecambe cross and sending the ball out for a corner that was easily dealt with my loanee goalkeeper Andrésson who extended his time with the Grecians for another 7 days this week. It was a brilliant run from halfway by Joel Randall inside twenty minutes from halfway by Joel, cutting it back to Sparkes who won another free kick in a dangerous position for Exeter. Unfortunately, Randall heads it just over and out for a goal kick. The first half contained a string of massive saves for the young goalkeeper Andrésson to deny Morecambe. On twenty minutes, the young Icelander smashed away a powerful effort by Phillips to keep the Grecians in the game. Another fantastic save at thirty minutes from Andrésson to deny yet another Morecambe as Collins is only able to clear as far as a Morecambe man who strikes, but the effort is tipped just over the bar by the hands of the goalkeeper. It was Joel Randall who broke the deadlock moments later as the Morecambe back line are unable to deal with a long ball over the top, capitalising on a defensive error, skipping past the goalkeeper on the floor and driving home. It could have quickly been 2 with Williams making one of his signature driving runs down the right, playing into Bowman who chests it down but straight into the arms of the goalkeeper. Exeter City were unlucky to concede at forty minutes as Mendez-Gomez capitalised from a mistake in the Grecian back line and slotted the ball in the back of the Grecian net from a tight angle in what became a difficult 10 minutes for the away team. Morecambe went into the break in the lead with Hendrie pelted the ball from outside the box driving the ball into the bottom right corner in added time to make it 2-1.

There were calls for an Exeter City penalty as Sparkes was taken down in the box that was turned down, much to the anger of the Grecian bench. Taylor almost compensated just after, but his chance flashed into the side netting as the Exeter pressure from the first half continued to build. Exeter City mounted considerable pressure in the second half, capitalising on the many loose balls from the Morecambe team, but unable to challenge the man in-between the sticks. The Grecians drew level at seventy-one minutes as substitute Nicky Law drove down the right side, cutting back to Taylor who continued his great run of form, earning a well-deserved point for the Grecians. Taylor’s goal was a catalyst for a barrage of Exeter City chances late in the second half, a passionate performance from the boys. In a half that was all Exeter City, it could have ended in Exeter’s favour in added time as Key flashed a chance across the face of goal, but with no one there to connect the final touch and the final whistle blown it could only be a draw for the Grecians. 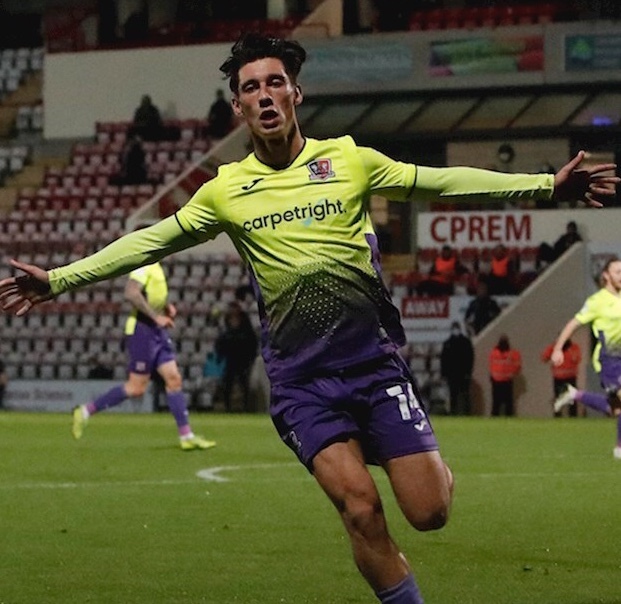