Exeter City are into the hat for the second round of FA Cup after beating AFC Fylde 2-1 at St James Park.
By Lorcan Hankin

The Grecians came from behind thanks to first-half goals from Matt Jay and Alex Hartridge to beat the impressive National League North side.

Both sides came into this fixture in good form, being unbeaten in their last ten matches. Matt Taylor named a starting line-up filled with both youth and experience to face the national north side. Rory McArdle returned and captained the side, with Alex Hartridge, Harry Kite, and Ben Seymour making starts for the Grecians. The Coasters who currently sit top of their respected league, named a side packed with Football League experience and were looking for a cup upset at St James Park. Exeter nearly had the perfect start when a quickly taken corner caught the Fylde backline off guard, but Hartridge’s header went just wide of veteran keeper Neal in goal. A cagey ten minutes followed as both sides were trying to work each other out, but it was Fylde that capitalised and took their early chances. Fylde’s danger man Haughton made room on the edge of the box and found Hulme whose neat turn created space for him to slot it past Andresson in goal. Fylde had the wind in their sails and was passing the ball around with confidence. Shaw and Tollitt had speculative efforts from range, but both attempts were saved comfortably by Andresson. City slowly found their feet and was creating chances of their own, and soon found an equaliser. Jack Sparkes’ cross managed to find Jay on the outside of the box, and his impressive shot found its way into the corner of the goal. The Grecians then doubled their lead a few minutes later when a looping corner found captain Rory McArdle at the back post who managed to head it back into Harry Kite. He managed to keep it alive and find Hartridge in the middle to flick goalwards and past Neal in net, much to his surprise. Exeter went looking for their third, with Jake Caprice delivering a teasing cross into Seymour, but his point-blank effort was saved by the keeper. Sparkes then had an effort soon after, with his cross-cum-shot nearly catching out Neal at the far post. Haughton had a decent effort at the end of the first half for Fylde, when his deflected shot from range nearly beat Andresson but sailed just over the bar to his relief.

City started the second half strongly, with Nicky Law and Jay linking up well in the Fylde box, but Law’s cross couldn’t find Ryan Bowman in the box. This was City’s only real chance of the second half as Fylde dominated possession, looking for a leveller. Andresson was called into action when Shaw’s close-range effort was deflected, but the impressive Icelandic on loan from Reading managed to tip it over the crossbar for a corner. The next twenty minutes saw AFC Fylde having the majority of the possession, having the ball in some good areas but struggling to conjure up any meaningful chances. Fylde bombarded the City backline with crosses, free kicks, and corners but the Grecians stood firm with McArdle and Hartridge making key blocks and tackles. This was the story of the half, but Exeter managed to withstand the pressure and advance to the second round of the FA Cup. 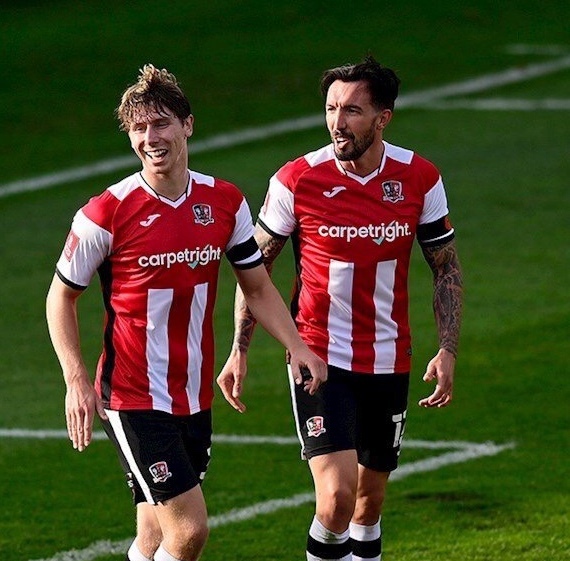