Exeter City's 13 match unbeaten run came to an end against Oldham Athletic thanks to two stunning strikes from George Blackwood and Danny Rowe.
By Lewis Ward

Randell Williams had given City and early lead, but a first half fight back saw the Latics head back to Manchester with three points as the Grecians were unable to turn round the deficit.
City were looking to continue their excellent run at St James’ Park which had only seen two defeats so far in the past two seasons. Ten games unbeaten in the league campaign since the defeat to Port Vale in August, Matt Taylor made two changes to the side that drew with Bradford City. Jake Caprice and Rory McArdle returned to the side replacing Josh Key and Tom Parkes due to injuries.
The opening moments were end to end. Both teams were looking to strike early. Oldham Athletic attacked with Dylan Bahamboula delivering a dangerous cross, which was well cleared by Pierce Sweeney. In turn that clearance turned into a nice counter for the Grecians, breaking towards the St James Road Stand. Williams beat his man, cut inside, and got his shot away. Unfortunately, the effort was straight at Ian Lawlor in the Athletic goal. Both teams couldn’t seem to grasp the game. The turnover of possession happening far too regularly for both managers liking. Then a deep cross from Jake Caprice curled onto the head of Matt Jay bringing a great save from Lawlor. Luckily for City, the rebound fell to Williams 12 yards out and he smashed the rebound into the roof of the net, putting City into the lead. If the Grecians were hoping the early goal would dampen Oldham’s spirits, this wasn’t the case. A fabulous goal saw Athletic level ten minutes later. Good one touch play round the City box, saw the Latics play some decent football and eventually found Blackwood free on their left-hand side. He stepped in first time and swept the ball into the far corner passed Andresson, who’s dive just wasn’t enough to get to this stunning effort. Then a stunning freekick from Danny Rowe to top Oldham’s first goal had them ahead. Just after the half an hour mark, the freekick was 35 yards out. Rowe stepped up to the ball and drove it straight into the top corner, flipping the game completely on its head. The end of the first half came to conclusion with Oldham controlling the score line, yet the game was still in City’s grasp to respond in the second forty-five. There was one change at the break, Matt Taylor forced to bring on Alex Hartridge replace Jake Caprice which looked to be an injury to the full-back. This meant a formation change for the Grecians, as they went to a back five with Williams and Sparkes moving into the wingback positions. The second half started with City applying pressure and looking to respond early. A flurry of corners for the Grecians in the opening minutes sadly had no return and were dealt with by Oldham. Although the possession was in the Grecians favour they still needed that second goal, a decent ball in-behind made better by Ryan Bowman saw him nutmeg the defender and force Lawlor into a decent save down to his left. A double substitution on the hour saw the Grecians show their intent to get back into the game with Nicky Law and Nicky Ajose replacing captain Jake Taylor and Joel Randall. The pressure continued to mount, but City needed to be careful. With a freekick on the edge of the box, it was sloppily given away and allowed Athletic to counter. Luckily a great recovery by Archie Collins kept the score line at 2-1. Then again from inside the Latics box the Grecians couldn’t the ball alive trying to get the equalizer, and it was another warning sign as what seemed a hopeless/aimless clearance, set Oldham on another counter.

With Blackwood leading the charge forcing a save from Jokull Andresson, his parry was met by Rowe. The Icelandic loanee was up quick to deny the Latics number 9 from getting his second of the game. Since going behind City had their best chance since going behind. Ajose slid Matt Jay in behind, the ball just too heavy for Jay to get a shot off first time. He was able to keep it alive and square the ball across the box for Bowman, but again the Oldham defence was there. Blocking his shot which looked to be a certain goal. Entering the last ten minutes of the game, City were still pushing the elusive equalizer with some sharp play around the box the crosses were just not reaching their targets. Oldham were resolute and difficult to break down. They were professional till the end with some tactically walking to the ball when if left the pitch. An unfortunate end to a good run for Exeter City in a game that could have swung either way. The unbeaten run came to an end by a stunning freekick from Danny Rowe which gave all three points to the Latics. City weren’t without their chances to equalize but just couldn’t produce the second goal when they needed it. Suffering only their third defeat at the Park in two seasons, the Grecians will need to bounce back quickly before returning to play against Colchester United on Tuesday night. 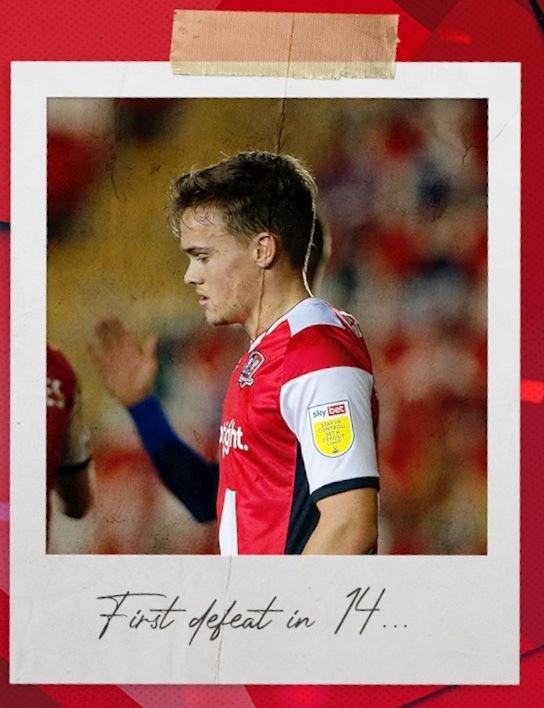