His three goal haul, alongside a double from Matt Jay and a Joel Randall tap in saw Matt Taylor's side bag six goals for the first time since a 6-4 win over Fulham 27 years ago. In reality, it could have been more for a City side who responded to Saturday's defeat in tantalising fashion.

It was the second game in four days at St James’ Park and it was the perfect opportunity for the Grecians to respond to their first defeat in ten league games. The U’s were looking to continue their own good run of form while also looking to pick up their first away win of the season. With Josh Key and Tom Parkes returning for City, the team had to pick themselves up and try to build a run of results again.The Grecians started brightly. The combination of Randell Williams and Key has seen success down City’s right flank this season was once again in full show with early one two’s resulting in dangerous crosses into the box. Although the Grecians had started the more aggressive, it would be Colchester to force their opposition keeper into an early stop. City had the best chance of the opening ten minutes. Williams again causing Bramall difficulties, twisting, and turning he delivered his cross to the back post. Where the arriving Randall somehow managed to lift the ball over the bar from a yard. However, it was Randall that would turn provider for the opening goal of tonight’s clash. A throw in taken by Jack Sparkes, flicked on by Bowman released Randall into the channel. He was able to deliver a lovely left footed cross into the box where fellow Academy graduate Jay was waiting to flick the ball passed the sprawling Dean Gerken. Following the opener City looked the more likely to double their lead. With dangerous crosses coming from the left and right, slipped balls almost slicing open the U’s defence. The Grecians looking dominate from set pieces as well with Harry Pell having to scramble to clear a headed effort off the line. The Grecians were in full control of the game. Colchester were pushing for an equaliser. Their pressure turned into Exeter’s gain. A precise clearance up-field by Jack Sparkes sent Jay in behind the U’s defence. Breaking away from his man, he delivered a cross like the one he had scored from twenty-five minutes previously. He curled the ball into the box and Bowman couldn’t steer the ball goal wards in what was city third real chance of the first half. Steve Ball in the Colchester dugout was looking for a reaction from his side making three substitutes at the break. Yet again it was Jay that had other ideas. Once again breaking in behind the U’s defence Jay turned and squared up Gerken. The keeper was able to make a decent save but only parry the ball back to Jay. Not knowing much about the rebound it bounced off him goal bound. Luckily for Colchester Craig Eastman was there to head the ball over the bar for a corner. Eventually the Grecians lead was doubled. Williams breaking through the heart of the Colchester defence, he had Bowman and Jay open on his right. He slipped the ball towards the two them. Jay took control, taking the ball into a one vs one with Gerken. The U’s keeper was left stranded when he squared the ball to Joel Randall who did not miss. Disappointed about conceding a second the U’s would find them chasing a third after a sluggish restart. The Grecians causing so many problems all night down the wings would again find joy from a cross into the box. Sparkes whipping a cross right behind the defence for Ryan Bowman to step in slot the ball passed Gerken to solidify the Grecians dominance on the game. Colchester were still showing signs that they were trying to get back into the game. Quick into play around the edge of the box lead to Luke Norris having a dangerous shot and forcing Andresson into a save at his near post.  Then another chance for the U’s, Bramall delivered a dangerous ball to the back post for Norris to head into the floor and centimetres wide of the post. The Grecians were showing their strength in wide areas. Randall once again providing for Bowman. Randall simple rolled the ball across the goal line taking all the defenders out of the game to give Bowman the simplest of tap ins.

To dampen City’s dominate performance was Colchester’s substitutes. Callum Harriot played a good ball over the top of City’s defence. Michael Folivi took a fabulous touch through the legs of Alex Hartridge to open the goal up, where he the slotted the ball into the far corner to make it 4-1. Then Bowman completed the evening with a hattrick. Sparkes was unfortunate not to get on the scoresheet himself with a fierce shot at Gerken who could only tip the ball onto the bar, but Bowman was there to tap in the rebound for his hattrick. City hadn’t finished scoring though. With the clock counting down and seconds left, Bowman was through again. Yet, he wasn’t able to convert from where he was and squared the ball to Nicky Ajose. His first time shot ricocheted away from goal into the path of the oncoming Matt Jay to make it Six.

A brilliant display proved that Saturday’s performance could have been a blip and the team tonight completely blew away Colchester. It was a result to lift the team going into the second round of the FA Cup against Gillingham. 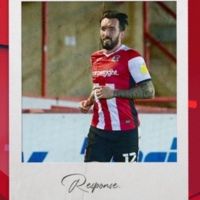 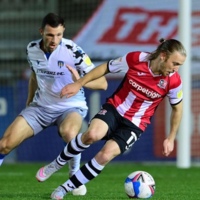