Exeter City advance to the third round of the Emirates FA Cup, beating League One Gillingham 3-2.
by Jasmin Western

Lewis Page and Nigel Atangana made their return from injury to the starting line up as Matt Taylor made 5 changes to the team that thumped 6 in against Colchester in midweek.

Gillingham’s first big chance of the game came inside fifteen minutes from a corner. Both McArdle and Oliver went up for the ball, resulting in the Exeter man down inside the box and the referee choosing to play on. Much to Exeter’s relief the resulting shot from Samuel was wide. Gillingham broke the deadlock at 21 minutes thanks to Vadaine Oliver who fired home after a defensive error from the Exeter back line allowed MacDonald to pick up the ball and set up the Gillingham man. Lewis Page’s return to action for the Grecians was bright was short-lived after he was substituted at 24 minutes for Jack Sparkes. Bowman, fresh off of scoring his first professional hattrick in midweek also went down in a spell of a worrying few minutes for the Grecians. After a worrying 5 minutes, came a glorious 10 with whatever plagued Colchester in the mid-week being brough back to the south-east with them as Exeter were able to fire three home in quick succession. The first came from Nicky Law, a fantastic effort from Bowman and Randall to set up Law who fired home from a tight angle across the Gillingham goalkeeper and into the corner.

Atangana was the first name to end up in Alan Young’s book after a high foot on Gills man Samuel resulted in a free kick just outside the box. Dempsey’s strike was low and out for a corner, which was dealt with by Exeter. After scoring the first, it was Nicky who set up Randall for the second. Breaking down the right the Exeter city man cuts in, leaving Randall to smash it home on his left foot to double the Exeter score line. It could have been 3 at 37 minutes as Jack Sparkes crossed into Randell Williams at the near post who puts a little too much on it and is only able to tip his effort over the crossbar. The third, and Joel’s second came just three minutes later with another assist from Law down the right-hand side. While the Gillingham goalie did get a hand to Randall’s strike, it wasn’t enough to deny the Exeter man his 3rd goal in 2 games. With the sun out, and a haze over the pitch developing the second half started slowly after a double change from the hosts. The play was fairly even, with few clear-cut chances from either team other than an attempted overhead kick from Oliver that was just wide of the Exeter goal. The Gills managed to pull one back with 10 minutes of normal time left as the Grecians we’re unable to get the ball out of their 6 yard box, resulting in some head tennis that Samuel was able capitalise on and poke it home to bring the hosts back into contention. While the hosts retained much of the play, the Grecians looked dangerous on the break with both teams anxious to get themselves into the third round of the FA cup and a potential draw with one of the Premier League giants. With Gillingham bringing themselves back into contention, the boys threw everything at getting a fourth and cementing their place in the third round. The early parts of added time were all in Exeter City’s favour with both Williams and Collins getting shots away but unable to hit the target.

Gillingham threw the kitchen sink, or should I say their Goalkeeper at it at the death as Bonham came up for the Gillingham corner and in true FA Cup style nearly fired home to take the sides to extra time, but it was just wide of the left post as the referee blew his whistle. 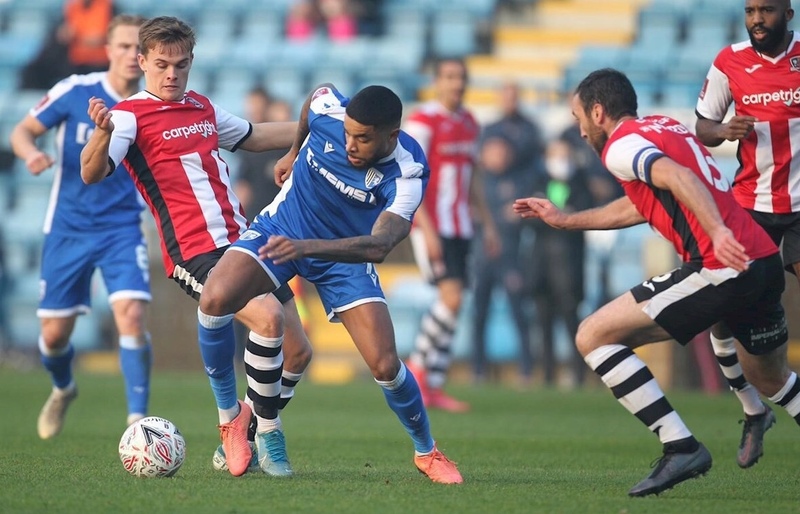