Three of City’s goals came in the first half. First, Ryan Bowman with a fabulous rebound effort to start things off. Luke Hendrie levelled up for the hosts, before Randell Williams scored two in five minutes to send his side into a two goal lead at half time.
Matt Jay kept the party going into the second half, as his strike from the edge of the box tallied to 13 goals in all competitions over the last week! The opening exchanges meant for a cagey opening, which lacked chances with just the one which came the way of City. Both sides could have been guilty of trying perhaps too hard to settle into the game, which brought the majority of play in the middle of the park. The game just needed that one goal to open it up and ease any pressure. which came after 20 minutes when Ryan Bowman cleaned up the pieces from Jake Taylor’s effort on the edge of the box from a corner to put the Grecians into the lead in Cleethorpes! There was an opportunity for an instant reply from Grimsby, Owura Edwards found Elliott Hewitt on the edge of the box but his effort went wide of the post, under pressure from the boys in red and purple this evening! Following the goal, City really started to find their groove and put the hosts under pressure. Taylor had another chance to celebrate a goal on his birthday soon after, but his effort was well saved by the legs of James McKeown. The home side did equalise just past the half hour mark. After good play from veteran midfielder Sean Scannell, Luke Hendrie managed to bundle the ball over the line in a goalmouth scramble to level things up at 1-1. With five minutes to go before the break, City retook the lead! A great turnover of possession, midway into Grimsby’s half allowed Archie Collins to squeeze a through ball into the path of Randell Williams who dinked it over McKeown and into the back of the net. The Grecians hadn’t finished, as Josh Key found space on the right to find Randell Williams inside the penalty area who converted from close range, in a crowd of players, to give Matt Taylor’s side a 3-1 lead minutes before going into the break.
The second half had somewhat less intensity to the end of the first period, but City still managed to produce quality in front of goal. The first chance after the interval though, came for the hosts. Scannell caused problems for the Exeter defence after beating Jack Sparkes but Jonny Maxted, making his first appearance for the Grecians this season, fisted the ball away from danger. Just after the hour mark, City looked to find a fourth. Key tried a shot from distance, which looked to be goal bound after taking a wicked deflection but Mckeown backtracked and tipped the ball over, not taking any chances! Soon after Grimsby had a chance and sneaked past Exeter’s backline. Scannell again the key man who had a chance to finish from close range after good work, but for a fantastic improvised block from Sparkes! Almost immediately after; the hosts will feel aggrieved for not getting a penalty kick from Sparkes’ block which appeared to strike his arm. The Grecians roared on - Jay made sure of a fourth goal, after fabulous work from Key and Williams who linked up well, Joel Randall took a strike which was blocked into the path of Jay who fired in the fourth, 4-1! Four was enough goals this time, as Taylor’s men march to the top of the scoring charts in League Two this season, with an impressive 30 goals in 15 games.
Grimsby Town: McKeown (C) (GK), Hnedrie, Preston, Waterfall, Rose, Clifton (Bennett 64’), Idehen (Pollock 45’), Hewitt, Scannell, Green (Gomis 64’), Edwards (Adlard 73’).
Subs not used: Battersby (GK), Taylor, Starbuck.
Booked: Rose.
Exeter City: Maxted (GK), Sparkes, Taylor (C) (Law 90’), Collins, Williams (Hartridge 82’), Bowman (Fisher 85’), Randall (Atangana 82’), Parkes, Jay (Ajose 90’), Sweeney, Key. 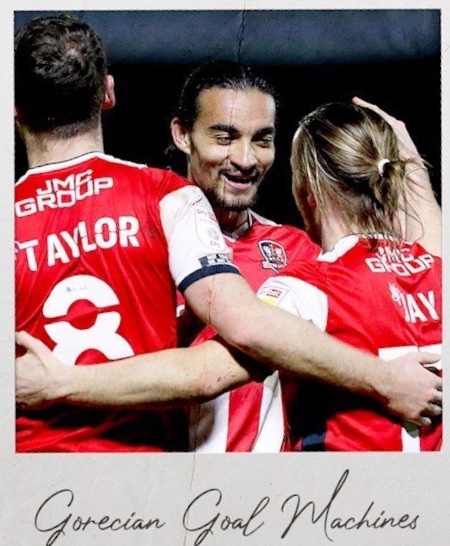