The fairy tale return of fans to St James Park was ruined by the pantomime villains from Northampton, as Exeter City bow out of the Papa Johns Trophy.
by Jed Penberthy

Nigel Atangana scored Exeter’s 50th goal of the 2020/21 season as 747 supporters returned to EX4 after nine months away. Nigel’s strike was sandwiched between soft goals from Danny Rose and Benny Ashley-Seal. Exeter were made to rue their second half misses and Keith Curle’s side progress. Matt Taylor freshened up the side with nine changes from Saturday’s defeat to Cheltenham, hoping to inject some fresh legs into the mix. St James Park welcomed its first fans in 280 days and the earliest settlers took in their surroundings as soon the gates opened at 6pm. We want to thank you all for your brilliant support over the last nine months and slowly but surely, we can’t wait for the Park to be packed again! City fans were clapping every touch of the ball in the opening exchanges and got their first moment of excitement on nine minutes as Jake Caprice floated a ball to the back-post but Jon Mitchell claimed with ease. Exeter teased the Northampton back line with some positive passes into Alex Fisher and Ben Seymour and earned a corner on 12 minutes. Jack Sparkes’ cross got flicked into the cold night sky, but Alex Hartridge could not keep his volley down. The first meaningful effort came in the guise of a Nicky Law drive from the edge of the box. Nigel Atangana won the ball superbly in midfield to set up the counter-attack. Unfortunately for Law and City the shot dragged wide of goal. The Grecians thought they had a strong shout for a penalty as Harry Smith forgot the Stadium’s social distancing regulations and wanted a festive cuddle with Fisher in the box. Referee Carl Brook was the bah humbug on this occasion. Despite Exeter’s dominance it was Northampton who went ahead. A simple corner into the box was met unchallenged from Danny Rose to put the visitors ahead. Rose should have netted a second for Northampton, but his close-range effort flew into the Big Bank. The Cobbler’s defended nervously down their left. Caprice overlapped Law with the afterburners on and delivered a teasing cross. After an almighty scramble Fisher had the chance to equalise but Town’s Fraser Horsfall had other ideas. After the break City were level to a roar that deafened the whole of Devon!

On 51 minutes Nicky Law’s whipped free kick was flicked on at the near post. Mitchell scrambled and parried only out to Jordan Dyer, who calmy laid it on a plate for Nigel Atangana who side-footed into the near post. City continued to probe and prod the Cobblers defence, and Matt Taylor turned to the bench. Ben Seymour was replaced by Nicky Ajose, who almost made an instant impact. A lovely ball through from Law sent Ajose on his way but the substitute could only find the palms of Jon Mitchell. Nicky Law then raced through in similar circumstances, but Mitchell bettered him as well in the one-on-one.

Atangana’s goal heroics were rewarded with a standing ovation for Jake Taylor to enter the fray. The Frenchman bossed the midfield all night and deserved his rest. Exeter’s transition wobbled the Cobblers, Ajose hooked another ball into Fisher but his header trickled wide, but with eight minutes to go Exeter were the creators of their own downfall. A high ball toward the City box was allowed to bounce inside the area. Substitute Benny Ashley-Seal swivelled and fired under Maxted. With the last throw of the dice, Caprice was withdrawn for Joel Randall. Northampton should have had a third deep into injury time but as Maxted was still tracking back from the attacking corner Ashley-Seal inexplicably fired wide for one of the loudest cheers of the night. Although the result wasn’t to be for Exeter City the main talking point is the return of fans. Thank you to everyone who attended tonight, and we look forward to seeing you back on Saturday with the league visit of Tranmere. 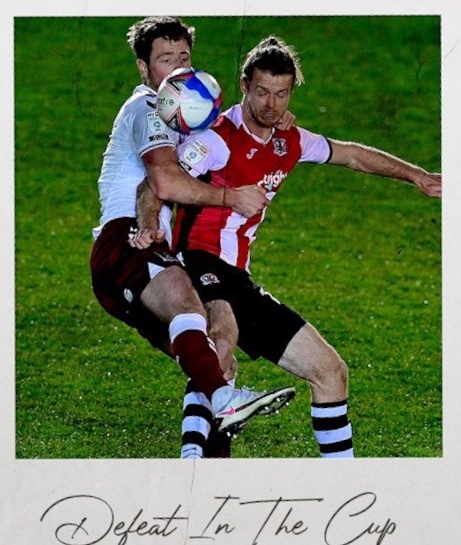