If Tuesday night had been the dress rehearsal at St James Park then this was the main event, as City returned to league action in front of supporters for the first time in 285 days and with a near-faultless performance.
by Will Barrett

The day also marked the club’s participation in our annual Stonewall Rainbow Laces game, and all of those who were able to attend played their part in making football feel just that little bit more inclusive once again. After City’s defeat to Northampton in the Papa John’s Trophy on Tuesday night, Matt Taylor reverted to the XI who played last week against Cheltenham Town, with Nicky Ajose and Jake Caprice replacing Ben Seymour and Nicky Law on the bench. For Tranmere, boss Keith Hill made three changes from their defeat away at Walsall last weekend, with Kaiyne Woolery, Otis Khan, and Danny Lloyd coming into the starting XI for Corey Blackett-Taylor, Paul Lewis, and James Vaughan. The omission of Vaughan provided something of a boost ahead of the game for The Grecians, as the former Everton, Norwich, Huddersfield and Sunderland striker is Rovers leading scorer this season with eight goals in Sky Bet League Two and 11 overall for the 2020/21 campaign. City kicked-off proceedings, and with Big Bank behind the team – in both position and voice – The Grecians almost got off to the perfect start when Jake Taylor tested Tranmere ‘keeper and captain, Scott Davies, from close range. In a lively start, it was not long until Tranmere had an opening up of their own. Breaking from their own half towards the Thatcher’s Big Bank, the ball arrived at the feet of Kaiyne Woolery but the former Swindon striker dragged his effort wide from distance. Five minutes in, Randell Williams weaved his way down the right wing before playing it off to Josh Key. Key then stood the ball up nicely for Joel Randall at the edge of the six-yard box, but his effort flashed just over the bar and into the flag-filled away end. The positive start suggested an early goal to add to the already positive mood inside the Park, and it duly arrived from the in-form feet of Ryan Bowman in the eighth minute. Matt Jay, making his 100th appearance for the club, split the Rovers defence with a superb through ball from midfield and Bowman remained composed as he lifted the ball high and wide of Davies into the back of the net. City remained lively and, on 18-minutes, City’s latest Centurion fed Randall the ball 12-yards out for a golden chance. However, before Joel could get his shot away, he was brought down with enough contact for Kevin Johnson to award a penalty, which Jay confidently dispatched with a cool side-footed finish into the bottom right-hand corner to make it 2-0.

Going into the game it had been discussed if it would be the recent potency of City’s forward-line or Tranmere’s record of eight clean-sheets in sixteen games that would win the day, but that conversation was ended in the 27th minute when Callum MacDonald’s generosity gifted Bowman with the ball on the edge of the box and City’s number 12 duly obliged by carving his way through and firing in the third from his trusty left boot. From here, the game settled into a more balanced pattern of play with both teams looking to play into their forward line, and it was City again who came close to getting the scoreboard operator moving again as the ever-alert Bowman snapped a shot just wide of the upright. However, it wasn’t all City, and towards the end of the first half Jonny Maxted was forced into action for the first time. Picking up the ball around thirty-yards out, Liam Feeney shaped and released a thumping left-footed strike and forced Maxted to stretch out a strong left palm to tip the effort over the bar for a corner. This boosted the visitors and from here until the whistle a series of City players, including Williams, Sparkes, and Parkes, each had to clear the danger as the visitor’s attempted to get one back before the break. For the first 15 of the second half, both teams continue to poach the ball of the other in the middle of the Park, and while a few shots were fired from both sides, the ‘keepers gloves remained unused until Rovers’ substitute, Morgan Ferrier, flashed a cross from the left into the hands of Maxted. On the hour mark the home side looked to build again and whilst Williams, Jay, and Randall were instrumental in bringing the ball towards the fans in the Big Bank, Jake Taylor, Archie Collins and all of the back-boys were equal to Tranmere’s numerous attempts to counter. This gave City a solid platform to build from and on 72-minutes the Big Bank got what it came for. Picking up the ball on the left-hand side, the perpetually energetic Joel Randall fed the ball into the path of Taylor who walloped the ball home in front of the fans to make it 4-0. Just minutes later, the skipper returned the favour and fed in Randall and although the forward could have easily looked for a well-deserved goal of his own, he squared it for Bowman to slot home into the empty net to complete his hat-trick and put the seal on a fine 5-0 win for the relentless Grecians. 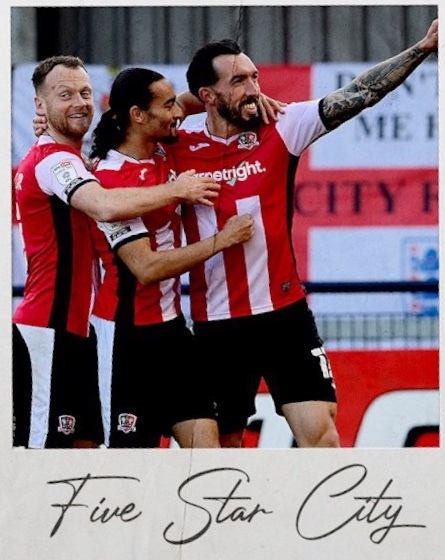