Exeter City were held to a 1-1 draw against Bolton Wanderers under the lights at SJP, following a goal apiece in the second half.
by Jasmin Western

Ricardo Alemeida Santos' own goal gifted City a lead midway through the second period, but they were pegged back by substitute Arthur Ghanoua just over ten minutes later. Manager Matt Taylor named two changes from the side that bowed out of the FA Cup on Saturday as Sky Bet League Two action returned to the Park for the first time in 2021. Exeter started bright inside the opening minute of the game, hoping to set an immediate reaction after the disappointing result of the weekend by applying some early pressure on the visitors. Several early chances came by the way of Ryan Bowman, but despite working hard for the chances, he couldn’t quite get Exeter off the mark early. City withstood an extended period of Bolton pressure with Sweeney able to divert the ball played into Sarcevic by Isgrove in one of several key clearances for the Exeter defender back in the side. A signature run down the right side of the pitch from Josh Key played Matt Jay in comfortably at eleven minutes, but the Exeter man was unable to get his 10th of the season as he struggled to connect cleanly to the ball. Despite having large parts of the possession inside twenty minutes, the Bolton defence were resolute in not allowing Exeter to get away early. The offside flag saved the Grecians from conceding as Eoin Doyle was called for offside by linesman in a dangerous position inside the Exeter City box. Once again, it was a late clearance from Sweeney to deny a Bolton goal, with the Irishman managing to get the smallest of touches on the line to see the ball out from goal in the biggest let off. Exeter’s clearest chance of the half came after half an hour with another sustained spell of pressure from the Grecians. A long run down the left from Jay set up Bowman who skipped past the Bolton goalkeeper. However, the angle was slightly too tight for Bowman to convert as the ball only made it to the post. Corner inswinging by Jay, unable to connect to a City head but only cleared as far as Collins who plays the ball in to Randall. He found Bowman but it ended up in the hands of the Bolton goalkeeper. Just before half time, the Grecians won a free kick in a dangerous position just inside the D as Captain Jake Taylor was brought down. Despite the best efforts from Jay the Bolton 'keeper managed to tip it over the crossbar, sending the sides into the break goalless.

Matt Gilks’ best save of the game came inside the opening chapters of the second half as Randall was denied chance to pull the home side ahead with his shot being poked away by the legs of the keeper. City finally got ahead as Jay beat his man, shrugging off another and saw the ball off, but it was a Bolton shirt who saw it in as Almeida Santos turned the ball home to get the Grecians ahead. After being on the pitch for only two minutes, Bolton substitute Ghanoua drew the away side level. It was Sarcevic on the break down the right who found Ghanoua inside the six-yard box for him to fire it home. It could have been two for the Bolton substitute who sent a shot wide after getting on the ball from Harry Brockbank. It then could have been a second for Exeter, coming the same way as their first through Santos deflecting the ball goalward. This time it was Key who sent the ball in, but the same mistake isn’t made twice as Gilks gets his hands to it. The Grecians came alive in added time with the desire to take everything from the game. The first chance came from Sparkes who unleased a mighty shot from distance to the surprise of most, except Gilks who managed to see it out in yet another important save for the Bolton man. Had it gone in, Nigel Atangana’s overhead kick from the resulting corner would have definitely made a contender for goal of the season, but it was only the crossbar for the Frenchman. 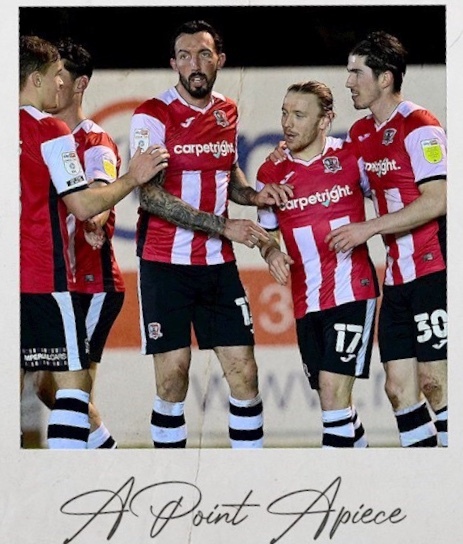