Exeter City were held to a goalless draw at the hands of ten-man Harrogate Town.
by Jed Penberthy

Warren Burrell was shown red in a second half where neither side could find an end product. Ryan Bowman had the best of City’s opportunities, and The Grecians will also be thankful for Johnny Maxted who pulled off a few excellent saves to keep honours even. Josh Key and Archie Collins also recorded shots as Exeter travel home with just a point to show for their troubles. After heavy rainfall in Yorkshire the last couple of days, kudos to the Harrogate groundsmen who worked tirelessly to get the game going, just half an hour behind schedule. Nigel Atangana was the one change for Matt Taylor replacing skipper Jake Taylor who was forced off against Sheffield Wednesday, so Archie Collins took the armband. Ryan Bowman managed to have the first effort on goal on nine minutes. After an aerial battle, the ball fell kindly for the striker who could only fire over. From the goal kick Harrogate worked the ball neatly to the right wing where George Tompson’s effort stinged Johnny Maxted’s gloves. Joel Randall tested the Town keeper on 34 minutes. A smart flick from Matt Jay sent the winger on his way but his cross-come-shot was dealt with by James Belshaw at his front post. Ryan Bowman was inches away from giving City the lead moments later. Jake Caprice got the better of his man down the right flank and delivered a teasing ball to the near stick. On this occasion Bowman’s connection was lacking. Up the other end Maxted was forced into a couple of saves to keep the scores level. First, he got down well to a rasping shot from the edge of the box. Moments later City’s keeper spilled Brendan Kiernan’s initial effort before atoning, by swiftly claiming the loose ball. City had a potential penalty shout waved away. Bowman almost capitalised on a poor back-pass to poke the ball beyond the Harrogate keeper, who collided with the City number 12 in the process. The Man in Black was unmoved, however. Josh Key went close on 38 minutes. MJ nicked the ball in midfield and threaded the ball through to Key, who swivelled and shot just wide of the post. In the next Exeter attack Bowman got clear on the left and squared the ball into the crowded box. Atangana set the ball for Archie Collins who fired over from the edge. Town found space behind the City back line shortly after but could not make the most of the chance as the game opened up, just as the referee called a halt to the first half.

The Grecians had the run of the ball at the start of the second half. Despite this City could not carve a clear-cut chance, with Ryan Bowman only being limited to a speculative effort from distance. Harrogate had a spell of their own, still to no prevail. Johnny Maxted ensured his clean sheet after pulling off an outrageous save just after the hour. Aaron Martin forced a powerful effort to the bottom left corner but was denied the mighty mitt of Maxted. The moment of the game came twenty minutes from time. Burrell, who had already clocked Jack Sparkes once, felled the City man again and Thomas Bramall offered no hesitation in giving the Harrogate midfielder his marching orders. Exeter, probing for a winner with the man advantage, almost found an opportunity. Sparkes hooked a ball into the Harrogate box which bounced around the box, but no red shirt could find a finishing touch. And that’s how it stayed at Wetherby Road. All eyes turn to Saturday now and the visit of Stevenage to St James Park. 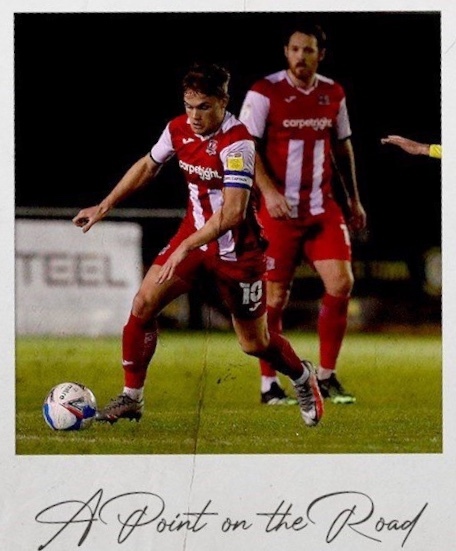