The Grecians put on a clinical display to take all three points at home against Stevenage.
By Jasmin Western

A late flurry of goals saw Matt Jay and Ryan Bowman on target for City and Elliott List for Stevenage - all that coming after Archie Collins' stunning opener as he replicated his strike against Forest Green on Boxing Day. Manager Matt Taylor named three changes from the side that took a point home on their midweek trip to Harrogate Town. The visitors also named three changes from their side that played the previous weekend.

Stevenage started bright with some early chances. The first came through Luke Norris winning the ball and playing in Danny Newton who failed to get clean contact on it leaving it for Maxted to collect. The second came from Norris, who’s shot took a deflection to the relief of the Exeter defence who looked to get their second clean sheet of the week. However, City were the ones to get themselves on the scoresheet first with a moment of Collins magic from the edge of the box. Jay gave the ball to Collins just inside the Stevenage half and he had the space to take it to 25 yards out and unleashed it off the bar and into the goal for his third of the season. It could have been another within four minutes for the Exeter number ten in similar style. It started with a corner played short by Law out to Jay who played in Collins to have another go, with less power landing it straight into the hands of the Stevenage goalkeeper. At twenty-six minutes, Bowman got his first chance of the game as the ball was crossed by Caprice. Bowman’s attempted acrobatics were unsuccessful with him unable to get decent contact on the ball. Stevenage attempted to rival Collins’ effort with their own long-range theatrics as Read found some space in the middle but didn’t quite have the precision as it went wide.

A fantastic save from Maxted denied Stevenage drawing level early in the second half. It was Norris who got the effort away and curled it towards goal. Maxted made a dive with outstretched arms to deny the shot and send it out for a corner which resulted to nothing. Jay worked hard to try and get his first goal in five for the Grecians with a string of chances in the second half. Before the hour mark his effort curled wide as the visitors were unable to clear their lines in the box causing something of a scramble. Another came after the hour in what would start a sustained period of pressure from the Grecians as his volley from outside the box was dealt with by the keeper. Jay finally got his goal with 12 minutes remaining as Nigel Atangana crossed it in after collecting the goalkeeper’s kick. It didn’t make it far as Jay brings it down with a high foot and fired home to double the lead for the Grecians. Stevenage responded quickly as their corner wasn’t dealt with properly as the clearance fell to the List, to the surprise of the Grecian bodies in the box, giving him time to drive it home and bring his side back into contention. The pace of the closing chapters of the game continued as Bowman struck home after a tricky pass from Nicky Law to set up the striker wide in the Stevenage box who launched a composed strike into the top corner. The reaction to Tuesday’s missed chances was clear to see, as three didn’t seem to be enough for the boys in red and white who mounted pressure on the visitors in the closing minutes of the game. Collins had a chance saved as he shot with his right at a difficult angle which was saved by the Stevenage keeper. Jay had one shortly after as he fired from the right side of the box, but the ball only made it as far as the Stevenage defence as the ball took a deflection. It so nearly could have been four in added time as Exeter charged on the break but Law could only get a half strike onto it from a close angle in a crowded Stevenage box to scuff it into the hands of the Stevenage keeper. 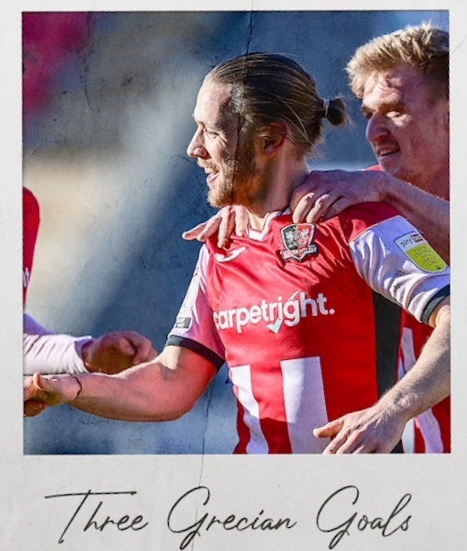