Exeter City made it two wins on the spin as they came from behind at half time to beat in-form Bradford 3-2 at SJP.
by Jasmin Western

Second half goals from Ryan Bowman and Matt Jay sealed three points after the Grecians fell behind at the break, first to Charles Vernam, before Olly Crankshaw fired home after Pierce Sweeney's leveller.

Bradford came down to Devon an in-form side, unbeaten in 8 and winning 5 of those despite being 17th in the league. The West Yorkshire side also had a busy transfer window bringing in 9 additions over the course of January.

City manager Matt Taylor named four changes from the side that made it back to winning ways on the road in midweek, beating Stevenage 1-0 thanks to a Rory McArdle header. Deadline day loan signing Robbie Willmott made his full debut for the Grecians after coming on as a substitute against Stevenage on Tuesday as Joel Randall also returned to the bench after his hamstring injury. The Bantams also had a share of new faces in their line-up with three debutants making the starting line-up in the form of Charles Vernam, Ollie Crankshaw and Jordan Stevens. City started bright with the loan signing Willmott making an instant impact down the right-hand side with a slew of crosses into the box inside the opening five minutes. With the opening periods of the game being a key area highlighted by the manager to improve on, this was promising to see. Another strong piece of attacking play from a Sparkes and Matt Jay one-two outside of the box. Sparkes laid it off to bowman who cut it back inside the centre of the box to be cleared hastily by a Bradford shirt and out for a corner. The corner ball came in and cleared as far as Archie Collins who picked up the ball and preventing a Bradford counter. The Grecians had plenty of the ball in the opening chapters of the game, this time with Taylor and Jay working it well and the city skipper releasing the ball across the box. It was both Sparkes and Bowman who went up for it but the Bradford men managed to clear it with appeals for a handball coming from the young City defender. Despite Exeter dominating the opening of the game Bradford took the lead against through their debutant Vernam, who took the ball on the break, laying it off to Callum Cooke, who’s shot was blocked after cutting inside with Vernam there to convert the rebound. It went from bad to worse for Exeter as Lewis Page left the field after twenty-four minutes after making an important clearance to keep Exeter in the game and injuring himself in the process, with Caprice coming on to replace him. Just when it felt like we needed a reaction, Irishman Sweeney was there at the back post to head in Exeter’s first goal of the game and bringing them back level with the visitors. The goal came from a corner, taken by Sparkes and delivering the ball at the back post for Sweeney to head home. On the break of half time Bradford got themselves ahead again through Crankshaw who picked up on a mix up in communication in the Exeter back line and skipped around Andresson to get their second and go into the break ahead. After having a goal called for offside at Carlisle, Bowman made sure there could be no doubt in the eyes of the linesman when he drew the Grecians level once again after the hour mark. It was Willmott who set the Exeter striker up on a plate for his 11th of the season after a superb run down the left, picking Bowman out with a peach of a cross. Being out since mid-January with a hamstring issue, Randall was welcomed back to St James’ Park after seventy minutes coming on for Josh Key, as Wilmott moved back over to the right side of the pitch where he dominated so early on. Bowman was played in well through a long ball over the top playing him through on goal but to be thwarted by contact with the Bantams keeper with the ball in the air. Judged to a be a foul, Exeter won a penalty which was taken by Jay who took it slow and dinked just over the keeper who dived early, but still managed to get a toe to it. Exeter made their third set of changes in the closing ten minutes of the game with debutant Willmott and goal scorer Jay making way for Seymour and Hartridge. 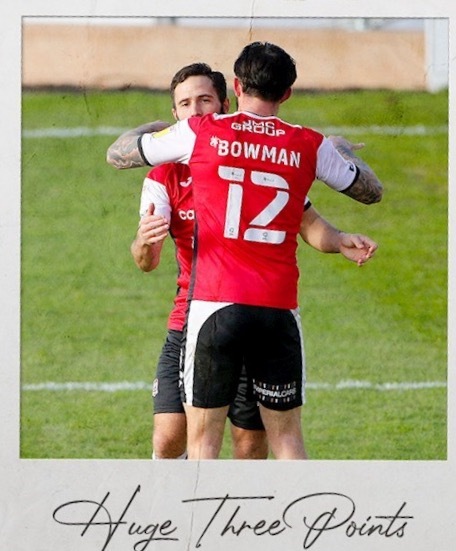