Exeter City picked up an incredibly hard fought and valuable point at Rodney Parade despite going down to nine men for over fourty five minutes in a 1-1 draw against Newport County AFC.
by Jasmin Western

Manager Matt Taylor made three changes to the starting line up from the side that played Bradford at home 10 days ago with young keeper Harry Lee taking to the bench. With the Grecians visiting his parent club, loan signing Robbie Willmott was of course unavailable to the Exeter City Manager.

Heeding the feedback of the manager in previous interviews, Exeter City started bright iand full of pace in the opening few minutes for the visiting side, with a strong attacking threat, after often being the one to concede the early goals. There was a very early chance for the Grecians inside the opening minute of the game as Matt Jay was free in space down the left-hand side of the pitch, but his shot was deflected out for a corner which was dealt with by the hosts. Despite the strong start, the early drama in the game came not with a goal in the back of the net but with the official showing his red card to Alex Hartridge, as Exeter were down to 10 men inside 10 minutes. The challenge came as Nicky Maynard was brought down by light contact from the young city defender. Understandably, the tone of the game changed for the Grecians being a player down so early on. Exeter being down a defender and looking to stave off a challenge from the hosts as they looked to monopolise on their manpower advantage. Despite being a man down it was Exeter that managed to get the only goal of the first half through Ryan Bowman after twenty-two minutes. Ryan took the second ball down well on the half volley and despite the Exiles keeper getting himself to it, the ball wasn’t controlled and made its way into the back of the net for some welcome relief for the weakened travelling side. It was the hosts that made the first alterations to their starting line-up through a double substitution as they brought on some more attacking threat in an attempt to overrun a weakened Exeter side. Manager Matt Taylor made his first change in the last few minutes of first half normal time, looking to shore up the defence bringing Seymour off for Josh Key. Unfortunately, it went from bad to worse for the Grecians as just before half-time goal-scorer Bowman was given his marching orders and joined Hartridge in the dressing room due to an aerial challenge with a Newport man that resulted in some nasty contact between Bowman’s elbow and Demetriou’s head. Despite the Newport man needing some attention from the medical staff while the officials deliberated, he was able to continue playing. It was a nervy four minutes of additional time as the two-man advantage afforded to the hosts began to show as the pressure on the Exeter defence was clear to see. Despite losing two players it was the Grecians that went into the break ahead, with a big second half needed from the boys to walk away with anything from the game. There was no surprise that the Grecians took every moment they could of the half time break leaving the hosts out on the pitch before the start of the second half. As expected, the Grecians had everything to do in the second half as the majority of the play happened in their half. It was save after save from the young Icelandic keeper who despite being in his maiden year of men’s football probably had more involvement in this game than all of his previous this season combined. Despite the frustration of having both games called off last week the rest was probably welcomed come the second half due to the intense demand put on the entire of the Exeter men remaining on the pitch as they put their bodies on the line to protect the lead they had gained in the first half. While resolute at the back, there were opportunities for Exeter to counter, especially when the fresh and fast legs of Joel Randall were brought on at seventy-minutes as Matt Jay made way for the young winger. Within seconds of coming on he could have made it a second for the Grecians as he found himself free in the County area, laying it off for Archie but he just couldn’t wriggle free and find the back of the net. It was save after save for the Jokull Andresson who gave absolutely everything in the second half, constantly preventing the ball from ending up in the back of the Grecian net. Unfortunately, despite giving everything and pulling off some unbelievable displays to deny the home side Newport got their equaliser through Dom Telford who nipped a loose ball in the box in with a header. The Newport pressure continued right up to the final second of the 5 additional minutes of added time. 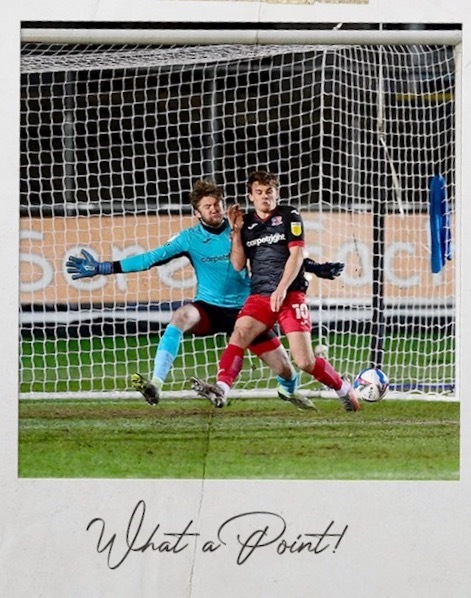