The Grecians are heading back to the Devon coast with nothing to show for their efforts as Carlisle United took all three points in a the top of the table clash at a chilly Brunton Park on Saturday afternoon.
by Aidan Jones

It was just the one goal to separate the sides, Lewis Alessandra got it for the hosts inside the first ten minutes, after a long ball was not dealt with, he was there at the back post to fire in the match winner, with the games first real attempt on goal.
It was a scrappy start to the game ten miles from the Scottish border. Both sides fought in the middle of the park to find their feet with the game set up to be a close encounter between the two promotion hopefuls. It was the home side who took an early lead in Cumbria, as City didn’t deal with a long ball into the box and didn’t get the ball away before it was fired into the roof of the net by Lewis Alessandra. Exeter grew into the match after the first goal and enjoyed possession in the middle of the park, but not too much in the final third as Carlisle dominated chances, even though they were limited to efforts from distance. Josh Key who has been an important player for Matt Taylor’s side this campaign, did brilliantly to get past his man and get to the byline, but his floated ball in didn’t trouble Paul Farman’s goal. City responded well to going a goal behind and continued to put Carlisle under pressure, although the defence did have to stay alert to the strong strike force for the hosts. Ten minutes before the break, Exeter could have had a penalty as Jack Sparkes was sent tumbling inside the penalty area, Martin Coy was unmoved but did appear to give a talking to, to both players. Matt Taylor had work to do with his City team at half-time and judging by how his side started the second period, it seemed like they were words of wisdom, as Carlisle’s defence had to weather an early second half storm. First, there was  another decision for the referee to make as Nicky Law was nudged over inside the penalty area, appeals very few and far between, before moments after, Matt Jay burst down the near side In front of the press box side of Brunson Park, but showed too much of the ball to Rhys Bennett who managed to turn the ball behind for a corner. City then attacked again, this time it was Law again in the action, found Key who saw his whipped ball behind for another corner for the away side. Next, was a very nearly moment for Exeter and Ryan Bowman, who after a cross drilled into the box, he tapped home virtually on the goal line from and offside position, but a confusing moment as the referees assistant waited until celebrations had started before lifting the flag for one of the clearest offside calls of the season so far, no goal. Less than a minute later, it was Carlisle’s turn to have a goal ruled out. Nick Anderton had the ball in the back of the net but rightly so, the referee gave a free kick the other way for a foul on Jokull Andresson who has returned to the Grecians on a non-emergency loan until the end of the season. It was clear to see that the second 45 minutes was a lot better for Matt Taylor’s side with a lot more urgency going forwards, but still the hosts defence stood resilient, to a number of crosses including from Lewis Page who forced a corner for the visitors. A Carlisle chance was something of a rarity in the second half, but a chance it was after a rare mistake from Key who allowed Alessandra in for what could have been his second of the day but his effort was fired over the crossbar. The last action of the day brought hope to Matt Jay’s side as Seymour did brilliantly well to win a free kick which was whipped in and then eventually cleared away by rather home defence, who unfortunately for Exeter City were a rock this afternoon. With the games coming thick and fast for Taylor’s side, there is no time to dwell on this result as  next up for the Grecians is a trip to Stevenage who themselves have struggled for points this season.
Carlisle United: Farman (GK), Anderton (C), Hayden, Riley, Guy, Alessandra (Walker 82’), Zanzala (Dickenson 56’), Patrick (Kayode 55’), Mellish (Charters 90’), Armer, Bennett.
Subs not used: Norman (GK), Furman, Toure.
Booked: N/A
Exeter City: Andresson, Sparkes, Atangana (Taylor 79’), Law (C), Collins, Bowman, Parkes, Jay (Caprice 79’), Page (Fisher 90’), Sweeney, Key (Seymour 85’).
Subs not used: Maxted (GK), Mcardle, Hartridge.
Booked: Parkes
Referee: Martin Coy 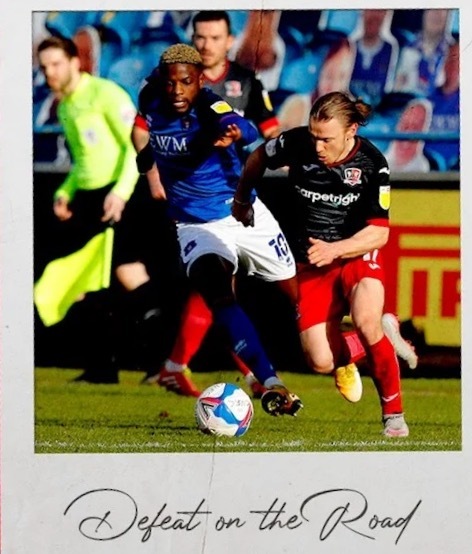