The Grecians fall to their first defeat in February, as Crawley win 2-0 at the People’s Pension Stadium.
by Jasmin Western

The Grecians, who went down to ten-men early in the second half, couldn’t tip the scales their way with two second half goals including a penalty from Tom Nichols sealing the points for the home  side.

Exeter City Manager Matt Taylor named 4 changes from the side that beat Colchester in midweek, with Alex Hartridge returning to the side after his suspension he picked up against Newport. With Ryan Bowman also still suspended from an incident in the same game, Alex Fisher took his place in the starting line-up next to midweek goal scorer Ben Seymour. The opposition had a debutant in the form of Davide Rodari who made his debut start for the West Sussex side. The line-up also featured former Grecian and academy graduate Tom Nichols who started, and the hosts only naming 6 subs. The first real chance for the Grecians came at sixteen minutes with the away side charging forward and beating the offside trap and Ben Seymour getting through. Unfortunately, Seymour who scored his first goal in Exeter’s last game miss hit it, leaving Fisher waiting in space in the box. The hosts then had their first real chance shortly after with Jordan Maguire-Drew in space at eighteen minutes, hitting the ball on the volley but sending it over the Exeter City bar, leaving the Exeter goalkeeper untroubled. The mid stages of the first half became very stop and start with a few fouls causing stoppages with set pieces and players needing treatment, including Irishman Pierce Sweeney who was down for a while receiving treatment for a knock. Some strong defence was needed from Exeter as McNerney sent the ball forward from an Exeter corner, leaving Caprice one-on-one with Nadesan on the counter, getting beat by the Crawley man but he fired it over in some welcome relief for the Grecians. The hosts were causing a threat again as Rodari on his first start found himself in some space after some difficulty but couldn’t quite get control of it and the ball made its way to the hands of Jokull Andresson, sporting a cap in the long early afternoon sun. The second half burst into life with chances for both the home and away side, the first coming from Jake Taylor from the edge of the box after it was worked well by the Grecians. Then almost immediately down the other end of the pitch with Jokull Andresson making a fantastic save to deny the header of Jack Powell. For the second time this month, Exeter were down to 10 men on the road, this time with Tom Parkes going in late on Nick Tsaroulla with an intense exchange of words being had between the two sides in the aftermath. From the resulting free kick, Hessenthaler eventually got to the ball after it pinged around the Exeter box and shot wide. Soon after Parkes’ departure from the field Manager Matt Taylor aimed to shore up the back line with a double substitution taking Seymour and Jay off for Atangana and McArdle. Crawley were given a penalty at sixty-one minutes with Tsaroulla being brought down again by an Exeter man, this time in the box by Jake Caprice. It was former Exeter man Tom Nichols who stepped up to take the spot kick, shooting straight down the middle while Andresson dived to the left away from the ball. Sweeney was once again down in the second half after another knock, but this time was not able to continue as Josh Key was brought on to replace the Irishman. The hosts doubled their lead after eighty-three minutes with Nadesan with Nichols weaving into the box and laying it off to Nadesan to tap it in the back of the Grecian net. During the four minutes added time, Collins attempted a shot which was deflected into the path of Alex Fisher who got a neat flick on it but sent it over the bar in what was the last chance of the game, leaving Exeter to fall to their first defeat in February. 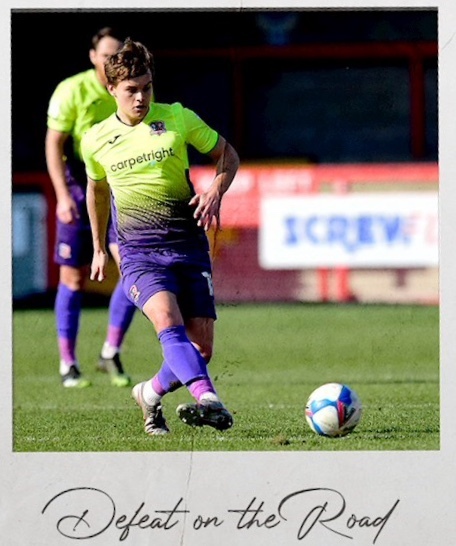