It was a game that had everything, including clean sheet, a hattrick, a penalty and a debut! City found themselves 3-0 up at the break through Joel Randall's opener and two from Jay, before the hat trick hero added his third with a second alf penalty. While the Grecian defence was largely untroubled, goalkeeper Jokull Andresson made some superb saves from set-pieces to deny the visiting team anything. The same couldn’t be said for the man between the oppositions sticks, who’s nervy handling and mistakes were capitalised on by the Grecians. Exeter City manager Matt Taylor made one change from the team that came away with one point at home on Tuesday night against Walsall as Ryan Bowman returned to the side after his suspension he picked up against Newport. The visitors also made one change through injury with Happe coming into the side. After scoring early in the reverse fixture, Wilkinson was not in the starting line-up and instead took his place on the bench. Much like the reverse fixture, there was some early action in this game with a mistake at the back from Orient which was capitalised on by Bowman, looking to link up with either Willmott or Jay. MJ was subsequently brought down in the box with few shouts for a penalty, which wasn’t given, and the ball was cleared by Akinola. Bowman’s presence back in the side was immediately felt, as he set up Randall to get Exeter away for their first goal. The ball came in from Bowman just off the halfway line with a neat little flick on to Joel in space who ran in and slotted away from the left of centre and through the legs of the Orient goalkeeper. It went from bad to worse for the Orient goalkeeper Vigouroux as he spilled the shot from Jay to give the Grecians their second inside as many minutes after two games without a goal. It was Lewis Page who set up Jay, again in space in the middle of the park. MJ fired it long from outside the area, with Vigouroux getting it and going to ground but fumbled it and the ball rolled in the net. It could have been a third from a goalkeeper mistake inside thirty minutes from an MJ free kick as the goalkeeper spilled it once again. The set piece was won on the edge of the box as Willmott was stopped in his tracks down the right after being taken down by Widdowson, who ended up in the book. The kick was swung in, got to Vigouroux, and eventually fell to an Orient man to clear. Exeter’s third eventually came just before the end of the first half as Jay scored his fifteenth of the season and second of the match after some chaotic fumbling in the box. The initial ball in the area came from Josh Key, who managed to get it to Randall. Randall let it go and hit the post, rebounded to MJ who managed to tap it in as time appeared to slow down. After two minutes added time, City went into the half-time break 3-0 ahead after a free scoring first half for the Grecians.

Jay got his third of the game and his sixteenth of the season through a penalty, taken in his usual fashion straight down the centre of goal. The penalty was won through Joel Randall, who was played on by and MJ dummy and brought down in the box by Akinola who ended up in the book.
The penalty also gifted MJ his first senior hattrick and the first time Exeter City have had three league hattricks in a season since the 1932/33 season. After their double substitution Leyton Orient gained a wind of increased energy and attack as they started to cause the Exeter back line a few problems. The clearest of these chances came from Wilkinson who wriggled into space and forced Jokull into a big save to deny the hosts a chance to get something out of the game. It was almost a fifth for the Grecians after seventy-five minutes as Joel swung the ball across the six-yard box but there was just a little too much on it for Taylor who slides in and can’t quite connect on the end of it. In the late stages of the game manager Taylor was content at shoring up the 4-0 lead bringing off Randall and Key and bringing on some more defensive players in Jake Caprice and Jordan Dyer in order to preserve the clean sheet. That was Dyer's league debut for the Grecians. The frustration from the O’s players was clear to see as the game played on with messy foul after messy foul leading to more and more of their men ending up in the official’s book, their fourth yellow card of the game being given to their captain Clay after a foul on Jack Sparkes. After a foul just outside the box from Nigel Atangana, the O’s looked to get something with a free kick in a brilliant area just off of centre from 30 yards out with Wilkinson over it. Jokull managed to just get enough on it to tip it over for an Orient corner, of which the Icelandic goalkeeper also dealt with as the fourth official’s board showed three minutes added time. Exeter City saw out added time with minimal issues, claiming all three points and a second clean sheet in a row. 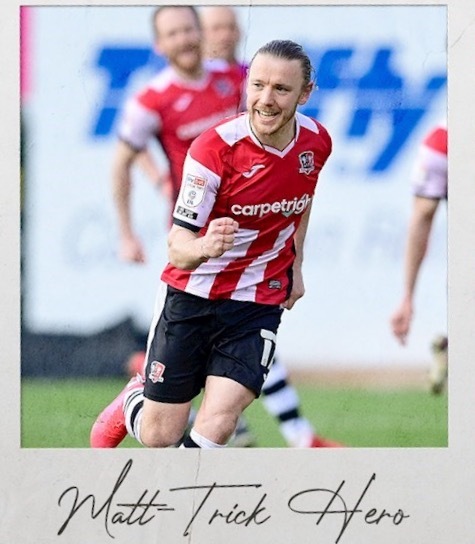