David Nugent’s first half kick was cancelled out immediately by Joel Randall - who was then forced off through injury. Danny Lloyd converted his chance from twelve yards mid-way through the second half to seal the points. In a slight switch-up for City, Matt Taylor made two changes. Lewis Page and Robbie Wilmott returned in favour of Jake Caprice and Jack Sparkes who dropped to the bench. Scott Davies in the Tranmere goal was the first to be called into action. Joel Randall’s low ball in from the left-hand side was easily claimed by the Rovers captain. After quarter of an hour, the home side carved the first chance of the day. Liam Feeney had time to pick out Kaiyne Woolery in space in the middle. It seemed harder for Woolery to miss as his glancing header edged wide of Jökull Andrésson’s post. The home side were ahead though on 18 minutes. After a six-yard-box melee, Peter Clarke was adjudged to have been fouled in the box and former-England international David Nugent dispatched to put the Whites ahead. But City were level almost instantaneously. The perfect response came after Ryan Bowman was able to flick a ball forward to Matt Jay. In the middle of the park, MJ expertly sent Joel Randall steaming towards goal. One-on-one with Davies, Randall kept his composure to slot in his tenth goal of the season. Unfortunately for the winger he pulled up holding his hamstring in the process and was forced to withdraw. Jack Sparkes was his early replacement. Tranmere began to grow in confidence and on 37 minutes won a free kick on the left. Feeney’s delivery evaded all but George Ray at the far-post. In his efforts to keep the ball in clattered into the advertising hoardings behind the goal. Manny Monthe came on in his place. Rory McArdle was called into heroic action in the next Tranmere move. The City number six managed to get a toe to a threatening Kaiyne Woolery cross. Exeter soaked up the pressure and shortly before the break Jack Sparkes found space in the final third. Lacking options, Sparkes forced a corner. His resulting ball in was simple for Nugent at the near post to clear as the teams went in level.

With Matt Taylor’s words still ringing in the Grecians ears, City looked sharper in the opening exchanges of the second period. Jake Taylor, Robbie Willmott, and Josh Key worked the ball well on the right with the latter’s cross earning a wasted corner. Rory McArdle also found space in the Rovers box in a later phase as the visitors started on the front foot. The Exeter captained then showed his experience earning a set-piece from a tantalising range. Sparkes hit it with venom, but too much it proved, flying high into the stand. The Whites frustration grew and started niggling at the Exeter legs. Jack Sparkes had the latest delivery wide right which had to be dealt with well by Davies. Soon after, Ryan Bowman had a half-sight of goal. The striker brought a high ball down in the Tranmere box and attempted an audacious lob over the on-rushing Rovers keeper. The execution however was missing. And would you guess it? It was Tranmere who scored the next goal just after 68 minutes. Their first real foray into the Exeter half saw Lewis Page penalised for handball and substitute Danny Lloyd converted from the spot. The Grecians early momentum stagnated, and the game went rather stale after the second Tranmere goal. The hosts held for the victory. 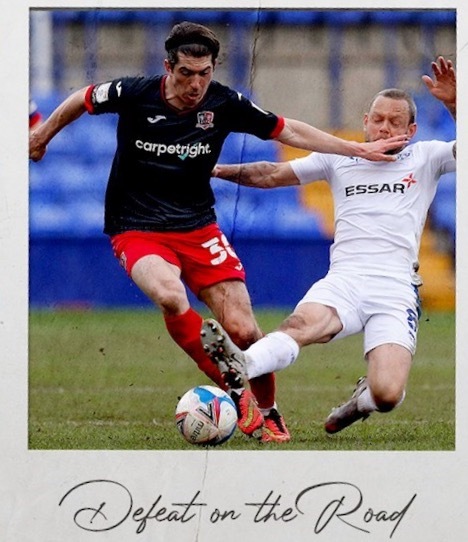