The Grecians fall to defeat at Boundary Park, beaten by Oldham Athletic 2-1
by Aidan Jones

Despite 24 shots from the Grecians, they couldn’t quite get themselves free from Keith Curle’s Oldham, who capitalised on their few chances. Exeter City Manager Matt Taylor named four changes from the side that fell to defeat against Tranmere on Saturday, with Joel Randall missing out after his injury he sustained in the weekend’s game. The Grecians started bright in the first half, with the first chance coming through Matt Jay in the fourth minute. The chance came through Pierce Sweeney who found Jake Taylor before a cross was swung into the danger zone, for MJ to connect, but send it over the crossbar. The first half was an end-to-end affair throughout, with chances at both ends for the sides. Bowman and Caprice linking up well down the right and causing all sorts of problems for the Oldham back line. Exeter’s biggest chance of the half came at thirty-four minutes, Jay finding Ryan Bowman in the area but he miss-hit and the ball fell into the hands of goalkeeper Walker. Almost straight away down the other end of the pitch the hosts brought themselves into the lead with their first clear chance of the game. The ball came in from a corner, and Jameson was left at the near post to head home for the Latics. With the urgency to draw the team level going into half time, Caprice had a stunning chance just before the break. The right-back bursting from his own area and letting the shot fly and only narrowly missing the back of the net. Despite having the best of the play, the Grecians went into the break a goal behind. The Grecians’ lined up the same going into the second half with all the urgency to get something from the game, with the hosts making their first change. Archie Collins had a brilliant chance ten minutes into the second half, taking one of his signature long range shots- but the Latics goalkeeper managing to get a hand to it. Much like the first goal for the hosts, it was after a key chance for the Grecians that they managed to get one for themselves. McCalmont picked the ball up from a corner on the volley and thundered the ball under the bar to make it 2-0. Once again, the Grecians looked eager to respond to the mounting challenge to get something out of the game. Matt Taylor made four changes in quick succession as he looked to change the system to favour Exeter’s chances, Jack Sparkes pulled a goal back for the Grecians as he tapped in low from a cross in the box to get his second league goal of his career. Quickly after the first, it could have been a second after a double save from the Oldham goalkeeper with chaos in his 6-yard box in what became a stunning performance by Walker to keep his side in the game. The Grecians threw everything at the game, with Oldham pressing hard on the counter looking to further their lead and impress their recently appointed manager. Despite, five additional minutes and another Exeter substitute, it was just not meant to be, and City return to Devon with nothing to show for their efforts. 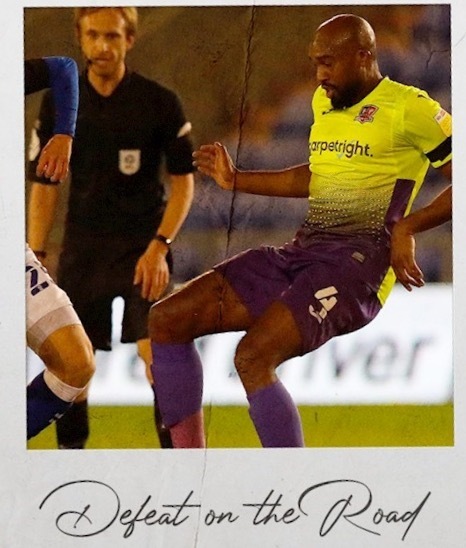