The Grecians got back to winning ways in spectacular fashion with a 4-1 win against Cambridge United at the Abbey Stadium.
by Jasmin Western

The stage was always set for an interesting tie with table topping Cambridge United as the promotion push continued for the Grecians who were looking to kick on from a string of difficult games. Exeter City Manager Matt Taylor named one change from the side who faced defeat against Port Vale on Easter Monday with Randell Williams returning to the starting XI after a lengthy spell out with injury. Table topping Cambridge United made one change to their side who drew away at Tranmere last time out. A familiar face was present in the U’s starting line-up with former Grecian Hiram Boateng taking his place in the starting XI. Exeter City got off to a bright as Jake Taylor was found free in the box and able to connect on the end of a Ryan Bowman leap to see the Grecians ahead in the opening minutes of the game. The Grecians early goal started the half as it continued with the visitors looking a pace ahead of the hosts throughout the opening chapters. The strong start from Exeter City continued as it was two inside 15 minutes for the Grecians Jack Sparkes connected on the end of the ball from a way out, striking low with his left after being set up by Randell Williams. Sparkes tried again minutes later from a similar position, but this time it wasn’t to be, as it dragged wide after taking a few bounces on its path. The Grecians continued through large parts of the first half with the majority of the ball and playing some brilliant attacking football and reducing the hosts to half chances on the break. The hosts clawed one back in the opening phases of the second half as Boateng fashioned a cross in the box, finding Ironside who flashed his shot across goal, taking a deflection and into the Exeter City goal, beating ‘keeper Jokull Andresson. Their chance gave the hosts plenty of confidence as they continued to look to find something from the game, getting a free kick outside the Exeter box as Hoolahan was felled. Thankfully for the Grecians, the kick taken by Boateng and then eventually collected by Andresson. The hosts continued to look dangerous with Boateng hitting the side netting at 61 minutes after being set up by Hoolahan. Matt Taylor made his first changes of the game moments later, looking to bring some fresh legs and minds on as the tempo increased. Williams and Page made way for Atangana and McArdle as Exeter City looked to retain their lead. The Grecians moment of relief came almost immediately after with Josh Key into space down the right after the ref playing advantage and shot low into the box, with both Archie and MJ ready to collect. It was a Cambridge man who got there first, but after some chaos in the box it was loose and fell to Archie who managed to tip it over the goalkeeper on the floor. It was four for the Grecians as Matt Jay got his 19th league goal of the season in the same place he got his first, towards the Cambridge away end after the ball was set up perfectly by substitute Atangana, leaving the League Two Player of the Month an easy job to slot it home. 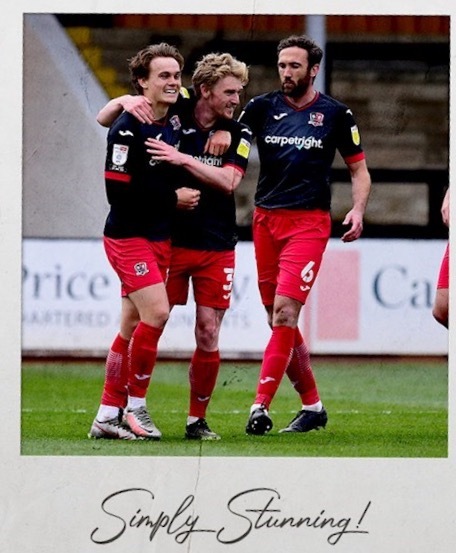