A critical week for Exeter City ended in a third successive goalless draw in the league for the first time since 1986, as neither side could make their moments count in this crucial Sky Bet League Two encounter at St James Park.
By Will Barrett (aka Dr Billy Barrett)

Matt Taylor made four changes from the trip to Forest Green, with Jake Caprice, Pierce Sweeney, Jack Sparkes, and Nigel Atangana coming into the starting line-up. For the visitors, Michael Flynn named an unchanged side from Newport County’s win over Newport County, which included former City captain Scot Bennet in centre of the Exile’s defence.

Ahead of the game, it was hard not to imagine the volume of the Park had this fixture been played in normal circumstances, and whilst the noise within the stadium was nothing in comparison, both benches were in good voice straight from the off. On the pitch, City showed their intent within the first five minutes, with Matt Jay and Caprice getting in behind the Newport backline, and whilst the move offered some early encouragement it would prove to be a frustrating afternoon at the attacking end of the pitch for the Grecians. Half-chances followed from Sparkes and Ryan Bowman, whilst Archie Collins almost snuck City into the lead when his curling cross evaded everyone and dipped just wide of the County goalpost. City were making much of the running, but Newport looked dangerous in spells, particularly when Aaron Lewis was involved, and in the 19th minute the right-wing-back skewed a shot just wide of the City goal. With the play switching from one end to the other, Bowman got to the by-line and crossed to Jake Taylor, whose header just evaded the on-rushing Matt Jay as the ball was gathered gratefully by Tom King in the County goal. Approaching the 30-minute mark, Newport almost found some success from a corner as Lewis Collins headed just wide of Jokull Andressons upright. Moments later, Collins was involved again and this time his effort took a full stretch from Andresson to deny the visitors an opening goal. At the other end, City responded with a threatening move of their own. Good work from Sparkes down the left-hand side saw the ball fed to Taylor in the centre of the box, but the Skipper couldn’t quite control his effort and poked the ball just wide. As the clock ran down on the half, Newport created the best chance of the opening spell when Josh Sheehan took advantage of a gap in the City defence and his drilled effort forced Andresson down to his right-hand-side once again to keep the scores level going in to half-time.

The second half opened with the same energy, with both Exeter and Newport’s Collins having attempts in the opening exchanges, yet despite working hard, clear cut opportunities would remain limited for the home side. City’s best period came just before the hour, when a volleyed effort from Sparkes kicked of a spell of play that ended with Caprice’s cross being headed over the bar and into the Big Bank by Bowman. That was to be Caprice’s last action of the game, as Matt Taylor made his first change of the afternoon with Josh Key coming on to make his 39th league appearance of the season, and the young-full back was soon in the action, taking on defenders and trying to make something happen from his side of the pitch. A slight tactical change from the manager just after the hour mark saw Taylor drop into midfield alongside Collins, with MJ dropping in behind the front two as Ben Seymour replaced Atangana. With this being a must-not-lose game for either side it perhaps wasn’t surprising to see tensions flare as Sheehan came the worse off in a 50/50 with Taylor, although it was somewhat perplexing to see the City skipper booked by Robert Lewis for his part in the incident. The resulting free-kick was well held by Andresson, and with City heading down the other end, Key once again looked to force the issue, first with a fierce cross that flashed across the six-yard-box, and then with a left-footed effort that rose high over the goal. Further changes then followed for City, as Taylor and McArdle made way for Alex Fisher and Randell Williams, who almost immediately drove at the at the Newport backline, but he couldn’t find the end product to match the endeavour. As the game wore on, Newport – who had made no changes of their own – grew in stature and whilst City’s defence were equal to the challenges given to them, Newport’s Collins should have ended things when he was put through on goal in the 82nd minute but faced with Andresson his close-range effort went wide of the target.  Then in the final seconds of the game, the ball fell at the feet of Padraig Amond just outside the six-yard-box, but once again City’s Icelandic ‘keeper was equal to the task as his faint touch slowed the ball enough for Alex Hartridge to get back and clear.

The result leaves City just three points shy of the final play-off spot, and whilst the Grecians will now have to rely on other results to squeeze back into promotion contention, the first task at hand will be Tuesday’s match with Grimsby Town at St James Park. 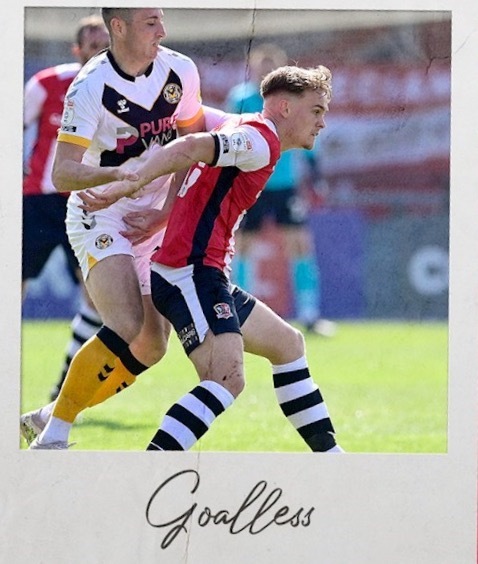