Pierce Sweeney’s header in the far depths of added time stole the three points for Exeter to keep the Grecians play-off hopes alive.
By Jed Penberthy

The defender met Jack Sparkes last gasp free kick to earn the visitors a vital victory after Randell Williams had levelled early in the second half.

Gethin Jones had put the hosts ahead in the first half, to the joy of the home faithful who had congregated outside the ground. On the full-time whistle celebrations were subdued due to a silly few who broke into the ground in protest. Bolton’s promotion hopes have been put on hold for the time being, whilst the Grecians are just one point outside the top seven with Barrow our final opponents of the season. Matt Taylor made three switches to the side ahead of this crunch match, with the rested Matt Jay and Ryan Bowman returning to the side alongside Alex Hartridge. Within two minutes City almost found a way through. Matt Jay turned in midfield and threaded a lovely ball into Ryan Bowman. Unfortunately for City, the striker’s touch evaded him. MJ almost gave the Grecians the lead after five minutes. Josh Key found a teasing ball down the right flank. Jay cut inside on his left-foot and fired at Matt Gilks’ legs, though better options were arriving at the far post. Alex Baptiste had the first shot in anger of the afternoon. His speculative effort took a deflection and drifted wide and the home side could not capitalise on the procession of corners. After quarter of an hour the home side got themselves into a deserved lead. A long ball over the top troubled the back-peddling City defence. Eoin Doyle’s pull back fell kindly to Gethin Jones who passed the ball beyond Jokull Andresson. The City shot stopper was called into action again on thirty minutes. Antoni Sarcevic sent a dangerous free kick destined for the top right corner, but the Reading loanee tipped his effort wide. Jake Taylor found himself room just outside the box but dragged his effort wide as the away side grew back into the game. Pierce Sweeney was aggrieved when his right foot volley was only given as a goal kick. Robbie Willmott had picked out the defender at the far post but fired over. Minutes later Taylor marauded into the box and tamely picked out Gilks’ gloves- suspicions were high as the City skipper seemed to have been fouled in the build-up.

Jay was close to levelling in the early stages of the second half. Josh Key delivered a wicked ball across the face, but Jay’s innovative flick couldn’t connect. But moments later Exeter were level in emphatic style! Robbie Wilmott picked up the ball with far too much room in the final third. The winger played the ball across to Randell Williams who took a touch, and with some aplomb, picked out the far corner much to the jubilation of the travelling entourage. Tails were up and Ryan Bowman found another shot on target which was calmly collected by the Bolton keeper. The hosts, trying to please the hopeful congregation in the carpark, searched desperately for a second with a procession of messy melees in the City box. Both sides turned to the bench for inspiration. For Exeter, Robbie Willmott and Lewis Page departed for Nigel Atangana and Jack Sparkes. Jay had a glorious chance to put the visitors ahead. Bowman flicked the ball wide to the now more-advanced Josh Key. His first-time ball was perfect for MJ who just had to hit the target. On this occasion his scooped finish only found the side netting. Eoin Doyle went close at the other end when his piledriver skimmed the post on its way wide. MJ kept prodding and probing and saw a dangerous free kick nestle onto the top of the net. Substitute Ben Seymour also guided a dangerous header wide in a nail-biting finale. Both sides searched for a winner. Sweeney’s stoppage time drive was close to reaching a teammates boot and Ghanoua could only find the stand behind the goal. And in the last minute of stoppage time, Exeter City found the moment of the season so-far. All eyes turned to the referee when Jake Caprice was fouled on the right side of the penalty box. Heads were in hands and hearts were pumping out of everybody’s chest. Jokull Andresson made his way into the Bolton box in a now-or-never situation for both sides. Jack Sparkes floated the ball to the back post and as time seemed to have stopped, Pierce Sweeney leaped above the twenty-one other players to nod the ball in to win the game at the death. Exeter’s celebrations were marred by distasteful scenes from a selection of who breached the security but the spoils on the pitch belonged to the Grecians who are now one point away from the play-offs. 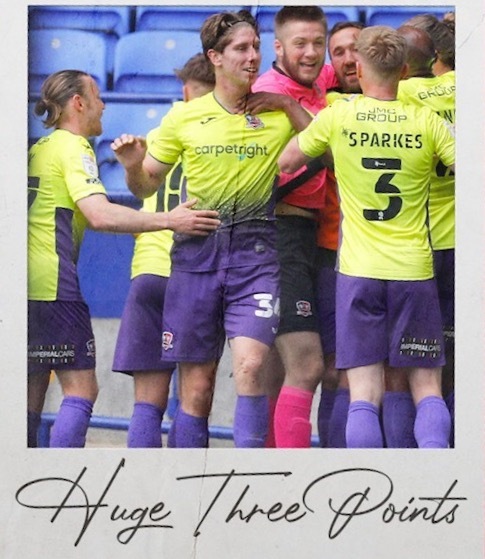