Ricketts started his career with Arsenal, with whom he won the FA Youth Cup in 2000 and 2001. He made one appearance for them in a League Cup tie against Manchester United.

He made the short move to North London rivals, Tottenham Hotspur in 2002, where he scored one goal in 30 appearances,

Ricketts then had two loan spells with Coventry City in 2004-05 and then Wolverhampton Wanderers in the same season.

In the summer of 2005 he moved to Wolves on a permanent basis, playing a total of 51 matches for them.

He was loaned to Queens Park Rangers in 2007, but was then released by Wolves on a free transfer.

Ricketts signed a two-year deal with Barnsley, but he left them in April 2008 and signed for Toronto FC of the Major Soccer League.

Following his release from Toronto, Ricketts had a trial with Aberdeen, but in early 2010 he moved to Hungarian club, Diosgyri VTK.

In August 2010 Ricketts signed for FC Dacia Chisinau of the Moldovan national division. However, he left three months later as he had not been paid by them.

Ricketts signed for German club, SV Wilhelmshaven in January 2011 and stayed there until the following May.

He went on trial at Southend United prior to the start of the 2011-12 season, and then on a similar arrangement with Stevenage.

His next stop was at Shamrock Rovers in August 2011, but he was not offered a contract and left them the following January.

Without a club he trained with Exeter City and signed a deal with the Grecians until the end of the season in March 2012. Ricketts who had been capped for England at under-18 and under-20 levels, made his debut as a substitute for the Grecians in a 2-0 defeat at Tranmere Rovers.

His 22 minute spell in an Exeter City shirt ended in April 2012 when he returned to Canada after receiving offers from clubs in Toronto.

On 7 January 2013, it was announced that Ricketts had signed for Club Deportivo Quevedo, Ecuador. Ricketts had his contract with Depotivo Quevedo terminated at the end of July 2013 after making 9 appearances for the club.

On 25 January 2014 it was confirmed that Ricketts had signed for PTT Rayong of the Thai Premier League. On 17 October 2014, Ricketts and PTT Rayong mutually agreed to terminate his contract.

On 8 January 2015, Hong Kong Premier League giant Eastern Sports Club made an official announcement that Ricketts had signed for them and taken the no.11 shirt after he impressed the team manager and coaches during a trial.

In March 2016, Ricketts headed to the Bangladesh Premier League with Abahani Limited Dhaka.

Ricketts joined Leatherhead on 3 November 2016, leaving the club a month later on 9 December 2016. In 2018 he was playing masters football in Ontario. 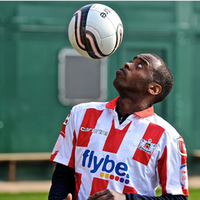 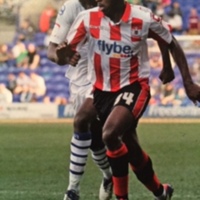