EXETER CITY turned on the style to delight their biggest crowd of the season with an emphatic win over Burnley and set a new club record of 13 leagues games without defeat. Saturday's stunning performance at St James's Park highlighted the dramatic transformation that has taken place at the club in six short months. It was in April that City slumped to a 2-0 defeat at home to Burnley on their way down to a re-election place. Manager Colin Appleton gambled on youth in his summer rebuilding and his hungry youngsters have repaid his faith in their blos- soming talents in the best way possible. They gave their finest performance of the season to demoralise and destroy an unimpressive Burnley side with exciting, attacking football and superb finishing. Brendon O'Connell led the goal charge with a typical clinical strike in the 28th minute and set up the chance for Steve Pugh to crown his recall with a well headed second goal after 54 minutes. And an exhilirating afternoon's entertainment was rounded off perfectly by Mark Robson's acrobatic overhead kick for the third goal 13 minutes from time. "That's the best perform- ance since I've been at the club," enthused Appleton after the game. "We've certainly set a high standard and I'm delighted. There was mature football played here today." City's rebirth, inspired by unselfish teamwork and genuine competition for places, is reward for the long suffering fans who have stood by the club through five lean years. They were given a real treat on Saturday as City preserved their proud record as the only unbeaten side in the Football League with confident and skilful football in difficult conditions. They took a while to settle in the swirling, gusting gale and a lot of early forward passes were overhit. But it wasn't long before City took control with O'Connell and Paul Batty doing most of the damage. Batty, restored to midfield in place of the injured Sean Priddle, had a sparkling game. He linked well with the attack, was always looking for the chance of a shot and did plenty of intelligent running to create countless openings for himself and his team-mates. Burnley goalkeeper Joe Neenan had denied the lively O'Connell twice before Batty claimed to have broken the deadlock with a shot which crept goalward but didn't quite cross the line according to referee Roger Wiseman. The lethal Batty-O'Connell partnership finally bore fruit 12 minutes before half-time. O'Connell always has an eye for a through ball and when Batty slotted a neat one into his path the 19- year-old left the Burnley de- fence in his wake before calmly driving his shot past the helpless Neenan for his sixth goal of the season and his third in as many games. Steve Biggins, looking a little short of full fitness, Robson and Pugh all tested Burnley's overworked back line before the break. City's defence again showed plenty of discipline and patience to restrict Burnley to very occasional breaks. The visitors were often over elaborate in their build ups and didn't force a save out of John Shaw in the first half. Joe Gallagher headed just off target from an Ian Britton free kick early in the second half but it wasn't long before normal service was resumed and City were back in command. O'Connell and Biggins narrowly missed the target before City scored the second goal they so richly deserved. There was good support throughout for the front men and none better than when Pugh burst forward from right back to rise above the Burnley defence and head home an excellent O'Connell cross. Batty, Biggins and Danny Keough all missed chance to increase City's lead and during a temporary lull, Burnley got on top for a very brief spell. During that time Britton fired a free kick narrowly past the angle of post and crossbar and Ray Deakin brought a full-length save out of Shaw who was determined not to concede the first goal against City at St James's Park this season. Burnley's hope of getting back into contention were completely flattened by a flash of scintillating brilliance from Robson. The ever-dependable Nick Marker and Biggins combined to present the 17-year-old with a half chance and he responded with a spectacular bicycle kick to rifle the ball past an astounded Neenan. "That's a once in a blue moon goal," admitted the talented teenager who has now scored twice in four games since making his debut just over a fortnight ago. City had further chances to build on their comfortable lead before Mr Wiseman's final whistle put sorry Burnley out of their misery.


There were five bookings City's Pugh and Marker and Burnley's Billy Rodaway, Neil Grewcock and Steve Kennedy — in what was never a dirty game. 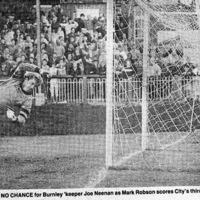 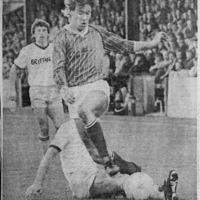 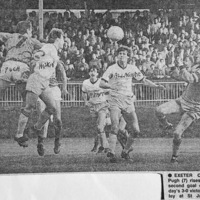 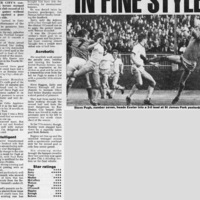