Exeter City opened their EFL League Two season with a 2-0 defeat at Blackpool in the first clash between the two sides since 2001.

Kyle Vassell’s first half goal gave the Seasiders the lead and an unfortunate own goal by Troy Brown condemned the Grecians to defeat.

It was a case of ‘what if’ for Exeter, who hit the post twice in the first half, but could not find a way past home goalkeeper Sam Slocombe.

City handed debuts to three of their summer recruits with Pierce Sweeney starting at centre back, Lloyd James in central midfield and Robbie Simpson up front. Craig Woodman came in at right-back with Tom McCready taken ill prior to the game and Liam McAlinden was named among the substitutes.

Before kick-off, supporters of both clubs joined together for a minute’s applause in memory of former Blackpool and City midfielder Russell Coughlin, who tragically died last week at the age of 56.

It took both teams a while to settle into the game with the first chance falling to Blackpool’s Bright Osayi-Samuel, who charged down a Brown clearance and the ball ricocheted just past Bobby Olejnik’s upright.
Osayi-Samuel then scuffed a shot into the arms of Olejnik, while Brad Potts was off target with a back post header.

City were not making the most of their forays forward and were made to pay when Blackpool went in front on 20 minutes. Vassell was played in on goal and while his shot hit Olejnik, the ball looped high into the air before bouncing into the goal.

City had a great chance to equalise soon after when Lee Holmes’ deft chip was headed against the outside of the post by Ollie Watkins and Jake Taylor was narrowly wide with a glancing header from a well-worked corner.

However, City were fortunate not to go two goals behind when a cross from the Blackpool left again found Potts at the back post, but he headed over the crossbar from close range.

There was then an unsavoury moment where Danny Pugh and Craig Woodman went in for a challenge and Pugh took great exception to the tackle by grabbing the City full-back and throwing him to the floor. Referee John Brooks issued both players with yellow cards.

Tom Aldred was then penalised for coming through the back of Holmes with City awarded a free kick in a promising position, some 25 yards from goal. James took it, but got under the ball and his shot drifted over the crossbar for a goal kick.

The Grecians again came close to an equaliser when Holmes did well to reach the by-line and pull the ball back to Harley. His shot was flicked goalwards by Simpson, but hit the inside of the post and rolled frustratingly across the line and to the feet of Holmes. He then chipped the ball up to Watkins, whose header was saved by Sam Slocombe.

The second half began in much the same vein with Osayi-Samuel cutting in from the left wing and shooting straight at Olejnik, but City came close themselves when Taylor led an incisive break. His cross was inadvertently headed goalwards by Andy Taylor and Slocombe produced a brilliant one-handed stop to tip the ball over the bar.

However, City’s task became that much harder on 52 minutes when Brad Potts’ cross was turned into his own net by Troy Brown from close range, under pressure from Vassell. Brown was forced off on 67 minutes and replaced by Matt Oakley, while McAlinden came on for Simpson as Paul Tisdale looked to change things. David Wheeler soon followed for Woodman.

Potts came close to adding a third goal for Blackpool, but his shot was cleared off the line, while Mark Yeates dragged a shot wide as Blackpool countered from a broken down Exeter attack.
City struggled to create anything clear cut to give the vociferous and sizeable travelling contingent something to cheer about with Sweeney’s blocked shot the closest they came to a consolation deep into stoppage time. 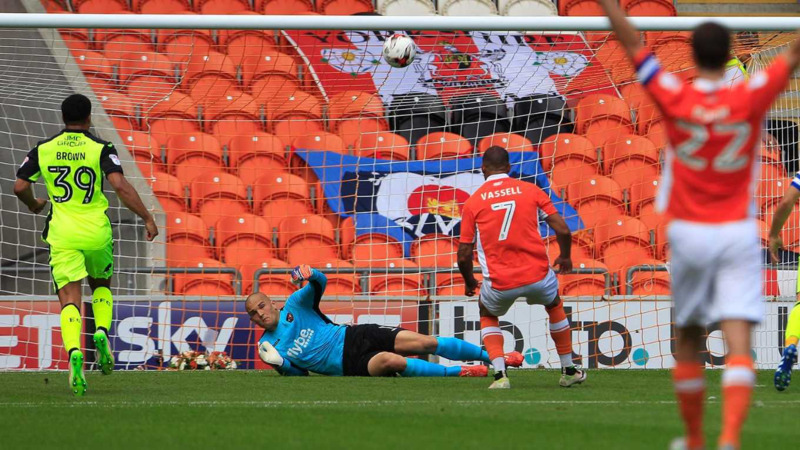