"Exeter City fans are planning a minute's applause at tonight's EFL Cup match with Brentford in memory of Adam Stansfield. August 10th is the anniversary of the passing of Adam in 2010, one of Exeter City's most popular strikers. Adam Stansfield scored 39 goals in 160 competitive appearances for the Grecians, helping them to win two promotion during his time at the club. He was a true fans' favourite and he will never be forgotten"

Ryan Harley’s extra-time goal fired Exeter City into the second round of the EFL Cup as the Grecians beat Championship side Brentford 1-0 in a tight affair at St James Park.

The midfielder’s first goal of the season capped off an excellent performance by City who had to battle hard at times, but with the impressive 15-year-old, and man of the match, Ethan Ampadu providing an assured display in central defence, the Grecians were well worth their victory.

Paul Tisdale made three changes from the weekend’s season opener with Blackpool as Lee Holmes, Craig Woodman and Troy Brown made way for Ampadu, Tom McCready and Connor Riley-Lowe.

Ampadu, on his senior debut, became the youngest player ever to represent the club at 15 years, 10 months and 26 days, beating Cliff Basten’s 88-year record after he made his debut on 14 April 1928 at 16 years and one month.

With the Championship side looking to bounce back from an opening day defeat themselves, they set about it from the start often using winger Josh Clarke to threaten the City back four.

With the Bee’s dominating much of the ball for the first period the likes of Simpson and Watkins struggled for service as Ampadu and Pierce Sweeney boldly held off the visitors in defence.

City limited the away side to half chances throughout the first period, often resulting in some wayward shots from the likes of early substitute Ryan Woods and Harlee Dean, with the latter shooting just wide from the outside of the area to Bobby Olejnik’s left.

The Grecians best chance of the half came on 23 minutes as the ball fell to new signing Robbie Simpson, who made his first competitive home debut for the club.

The impressive Ampadu clipped a long ball to Watkins who flicked the ball onto his strike partner Simpson, who found a yard of space to shot over Jack Bonham’s goal.

After the break the away side continued to probe the Grecians defence and early on had shots from Emmanuel Ledesma and Woods again going close.

But despite all of Brentford’s possession they were reminded that City, with the likes of Watkins, can pose a significant threat on the break.

The 20-year-old cut in from the left-hand-side after good build up play from substitute Liam McAlinden, which gave Watkins the opportunity to strike low to Bonham’s left but the Bee’s goalkeeper was equal to it.

With the second period starved of clear cut chances, City continued to remain solid with the Championship side unable to conjure up anything special.

The Grecians then had some good chances late on through Jake Taylor and substitute David Wheeler, but were unable to find a way past Bonham which meant the tie would be decided in extra-time.

City then continued that momentum into extra-time and impressed right from the whistle with a McAlinden free kick going just over.

But the pressure continued as Watkins’ excellent run on the left wing saw him cut in smartly to tee up Harley who side-footed a calm finish low into the right hand corner beyond Bonham’s reach.

The Grecians then went close to going two-up, this time Watkins going close but found his effort blocked well by the Brentford keeper.

Wheeler then had an excellent chance in the dying minutes to put the game to bed, but was unable to find the target despite only having Bonham to beat, as his shot dragged wide.

There was to be no late onslaught, as expected, on behalf of the visitors as City remained organised throughout to close out an excellent victory which will now see them in the hat for the second round. 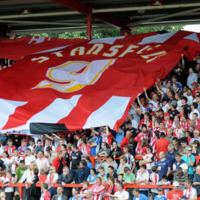 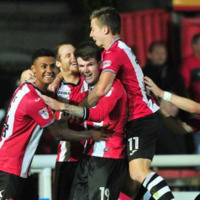