Exeter City could not build on an impressive cup win over Brentford on Tuesday as they fell to a 2-1 defeat at home to Hartlepool United on Saturday.

The Grecians took the lead in the first half as Liam McAlinden bagged his first goal for the club, but the home side were hit with a couple of sucker punches midway through the second half as goals Michael Woods and Billy Paynter turned the game on its head in matter of minutes.

City were without a number of first team players going into the game. Ryan Harley, who scored the winner against Brentford in the EFL Cup on Tuesday, dropped out injured and joined Lee Holmes, Troy Archibald-Henville, Troy Brown, Joel Grant and David Wheeler on the sideline.

However, it did not affect the first-half performance as the Grecians deservedly led 1-0 at the break through McAlinden’s strike.

The first half wasn’t awash with chances, but McAlinden went close to opening the scoring in the 17th minute with a deflected effort and then Jake Taylor got into a couple of good crossing positions as City had most of the attacking play.

Nathan Thomas was the Pools dangerman, but when he went on a slaloming run through the home defence his final ball to Lewis Hawkins was overhit and the ball ran harmlessly through to Bobby Olejnik.

That and a free-kick late in the half, which Thomas put into the wall, was the best the visitors created in the opening 45 minutes.

Therefore, it was a 1-0 advantage City merited at the break. The goal came in the 31st minute as Ollie Watkins picked up the ball from a throw-in and got to byline before cutting the ball back for McAlinden to roll a shot into the bottom corner.

City came close to making it 2-0 on the stroke of half-time as Craig Woodman crossed for Robbie Simpson to send a header arrowing towards the bottom corner, but Trevor Carson made a smart save.

Hartlepool made a double change at the break, bringing on Padraig Amond and Matthew Bates for Rob Jones and Lewis Hawkins and it had an immediate effect.

Amond almost drew the Pools level in the first minute of the second half as he took advantage of a mix up in the City defence to get hold of the ball in the area, but he dragged shot inches wide.

Three minutes later Thomas picked up a crossfield ball and burst into the area, but his fierce drive was palmed away from danger well by Olejnik.

McAlinden responded by swinging a left foot drive just over the Pools crossbar and then Simpson set Watkins away down the left side of the area to bring a good save out of Carson.

City came very close to making it 2-0 on 52 minutes as Lloyd James was brought down on the edge of the box by a rash challenge from Nicky Featherstone and the City midfielder picked himself up to curl a free-kick onto the crossbar.

McAlinden then continued his man-of-the-match display as he got around Toto Nsiala on by the byline and pulled a ball back across the area that agonizingly missed both Simpson and Taylor.

That was the last meaningful action for McAlinden though as he was replaced by Connor Riley-Lowe in the 69th minute as the Grecians pushed Watkins into the No. 10 role.

The Pools were level three minutes later as Lewis Alessandra got hold the ball in the box and drilled a low ball across that ricocheted out to Michael Woods who fired home from eight yards out.

And a minute later the visitors were in front as low cross from Carl Magnay was allowed to bounce its way to the back post where Paynter fired home.

Watkins had a glorious chance to equalize on 79 minutes as Riley-Lowe crossed from the left, but having got away from his marker his header shaved the right hand post on its way wide.

However, Hartlepool were still pressing for a third and were unfortunate not to get it when Alessandra crossed for Thomas to fire a shot at goal that was blocked by has his own player Oates in the six yard box.

The final City chance of the game came in stoppage time, but Matt Jay’s effort was deflected and calmly gathered by Carson. 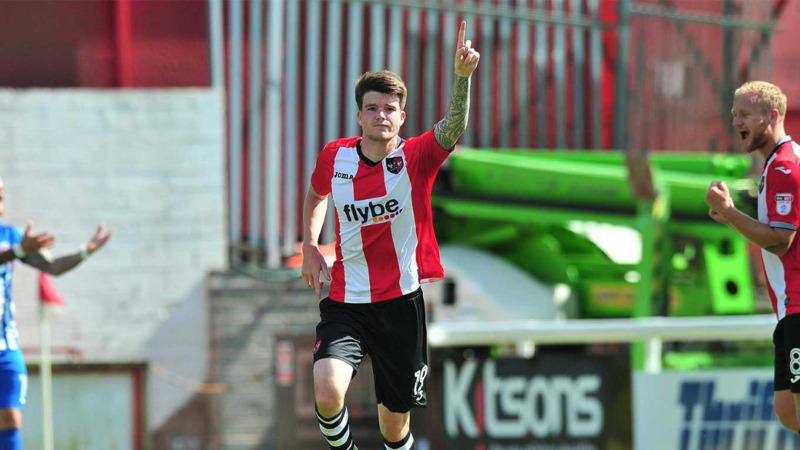