Superb strikes from Ryan Harley and Jake Taylor gave Exeter City their first points of the season as they beat Accrington Stanley 2-1 at the Wham Stadium.

The Grecians took the lead with 25 minutes to go, but were pegged back by a goal from former player Arron Davies, before going on to net the winner through Taylor two minutes later.

City manager Paul Tisdale made three changes to the side that lost to Crawley Town on Tuesday. Out went Matt Oakley, Ethan Ampadu and Liam McAliden for Craig Woodman, Connor Riley-Lowe and Troy Brown.

Stanley had slightly the better chances in the first half. Their best chance came when Davies had a shot cleared off the line just before the break as Bobby Olejnik spilled a cross. However, the City keeper looked to have been impeded in his attempts to catch the ball into the area.

Sean McConville forced Olejnik into another good save on 24 minutes as he got in on the right side of the box and hit a shot that took a deflection on its way towards goal, forcing the City keeper to react quickly and turn the ball around his post.

From the resulting corner Jordan Clark fired an effort narrowly wide. However, Olejnik played a long ball up from the resulting goal kick that sent Taylor in on goal and forced Matty Pearson to clear a goalbound effort from rolling into the back of his net, with keeper Aaron Chapman out of position.

Robbie Simpson also had a free-kick that deflected over the top and Troy Brown headed wide from a corner.

The second half started with Taylor crossing for Watkins to hit a scuffed shot and then Lloyd James continued City’s bright start to the half as he tested Chapman with a free-kick from 30 yards.

Olejnik had to be quick off his line to deny Sean McConville on 55 minutes and then saved a routine shot from Davies on the hour.

And it was shortly after this when City took the lead. Woodman and Connor Riley-Lowe combined well down the left and played the ball inside to Watkins who teed up Harley to hit a blistering shot into the corner of the net from 30 yards.

It was Watkins’ third assist of the season, Harley’s second goal of the campaign and a strike worthy of winning any match. However, Stanley had other ideas and were level five minutes later as McConville got in on the right side of the area and played the ball back for Davies to sweep a shot past Olejnik.

There was no celebration from the former City player – who left St James Park for the Accrington this summer – and the parity lasted for less than two minutes.

Simpson was the provider of City’s second goal as he crossed from the right for Taylor to meet with a first time volley at the back post that flew past Chapman.

After that it was a splendid defensive display from the Grecians, led by some tirelessly running by Simpson up front, who despite getting a nasty knock to the head, continue to hold the ball up and win free-kicks and corners where possible.

Jake Taylor: It was a special moment to in front of travelling fans at Accrington Stanley

Exeter City winger pleased to get winner at Wham Stadium

Jake Taylor says it was a special feeling to score in front of the Exeter City fans that made the trip up to Accrington Stanley on Satutrday.

Taylor volleyed home the winner in the 72nd minute at the Wham Stadium, his eighth goal in City colours, to give the Grecians their first win of the season.

Exeter were backed by a loyal following of 111 fans at Accrington on Saturday and Taylor said the goal was made that much sweeter because he scored it in front of the stand where they were stood.

Speaking about his goal, Taylor said: “I remember Simmo (Rob Simpson) going down the left and I was thinking ‘please, just over hit your cross a little bit’ and it came to me and I thought ‘just try and hit the target’ and thankfully it flew past the keeper and there is no better feeling.

“It was more instinct (than having to think about it too much) and luckily I got a good connection on it. It was probably a side-footed volley. Sometimes if you try and strike it too hard you can lose the accuracy. It was nice to just keep my head over it, hit the target and thankfully it went in.

“To see it hit the back of the net in front of our fans that travelled up here was a special feeling.”

Taylor added that it was great to get the Grecians off the mark in League Two this season and hoped it would provide the team with the boost they need to push on – starting with Hull City at home in the League Cup on Tuesday.

“We haven’t started the greatest, but a win on Saturday and in the fashion we did it probably makes it that little bit sweeter,” he said. “It is nice to get our first win and hopefully we can start pushing on now.

“It was a tough game and we knew it was important for us to come away with at least something from the match and to get three points was fantastic. We are now looking forward to the up and coming games now and progressing.” 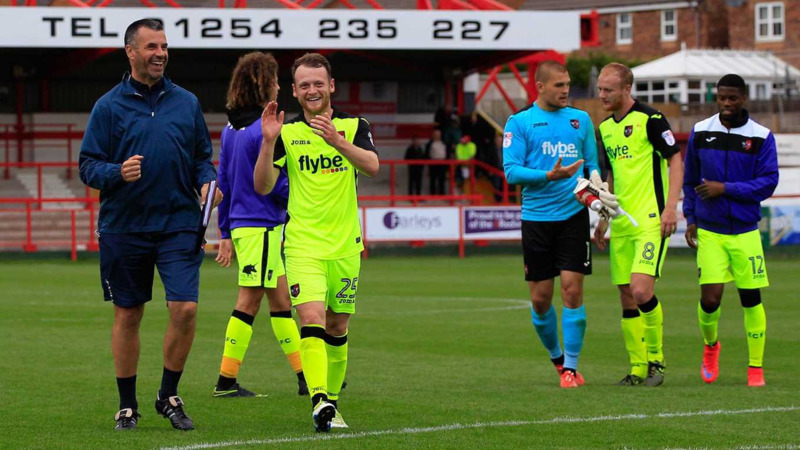