Exeter City stretched their unbeaten run to seven games as they began 2017 in style with a 4-0 win over Leyton Orient.

A double from Ryan Harley and strikes from David Wheeler and Liam McAlinden were enough to see the Grecians comfortably home and cement their position in the top half of the League Two table.

City manager Paul Tisdale made four changes from the side that beat Newport County 4-1 last time out with Reuben Reid, Craig Woodman, Jordan Tillson and Ryan Harley all returning to the starting XI.

However, it was one of the stars of the show at Rodney Parade who put the Grecians in front after four minutes though as David Wheeler produced a neat backheel flick on the edge of the six-yard box for his ninth goal in 21 games this season.

It came at the start of what was a very good first-half spell for the Grecians that saw them create numerous chances. Ollie Watkins, who scored a hat-trick in City’s last match, was at the heart of all the attacking action as his pace and dribbling skills caused problems to the O’s centre-back pairing of Tom Parkes and Yvan Erichot.

The 21-year-old was unfortunate not to double City’s advantage on 18 minutes when Reid, not for the first time in the game, put him through on goal with a lovely weighted pass. Watkins did find the back of the net, but his goal was ruled out by a very questionable offside flag.

Watkins’ luck didn’t get any better nine minutes later when Lloyd James played him in on goal as he fired a shot off the inside of the post. The effort ricocheted back towards goal off Tom Parkes, but the O’s defender was able to head the ball clear just as it looked as though he was going to score an unfortunate own goal.

Orient did have a couple of chances as the half came to a close with midfielder Nigel Atangana volleying over and Gavin Massey hitting a right-foot shot from an acute angle past Christy Pym’s left-hand post.

However, it was City who went close again just before the break when David Wheeler’s header from a corner was blocked on the goalline by Yvan Erichot.

Having not converted the majority of their first half chances there would have been a worry in the City dressing room at half-time that they might rue those missed opportunities at full-time.

City were left feeling aggrieved at the start of the second half as well as Watkins got brought down in the area by Tom Parkes only for referee Michael Salisbury to turn down the penalty appeals.

It was only two minutes later though that City made it 2-0 as David Wheeler’s crossed for Harley to tap the ball home at the back post for his third goal of the season.

Orient then made their first substitution of the match as Josh Koroma came on for Callum Kennedy and shortly after the visitors had their first effort of the second half as Atangana volleyed another effort over the Grecians crossbar.

Following his impressive performance against Newport Liam McAlinden then came on for Reid just past the hour mark and with his first touch he played Watkins in on the edge of the area and he was brought down just inside the box by Parkes. Harley stepped up to take the spot kick and fired it into the bottom left corner to make it 3-0.

Koroma then produced a good turn of pace to get away from Wheeler but his low cross was expertly booted out of the danger area by Jordan Moore-Taylor. The substitute went close again on 81 minutes, but after a surging run into the box his shot let him down and ended up in the away end.

However, City made it 4-0 moments later as Robbie Simpson played a pass into McAlinden and he slotted a shot past Cisak for his fourth goal of the season. 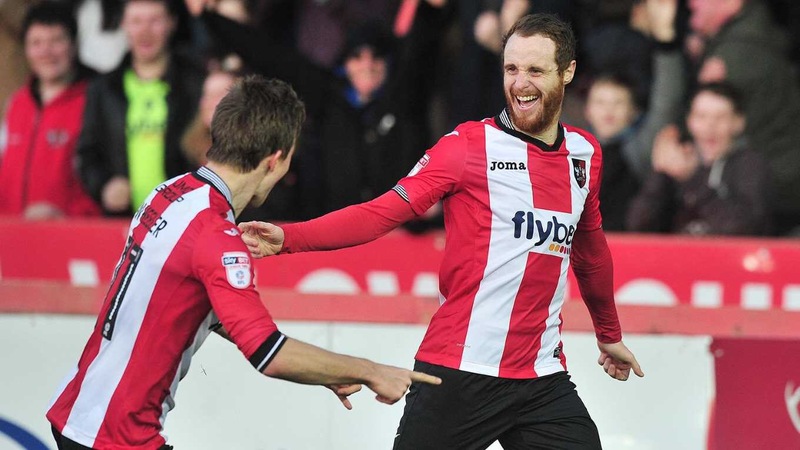