It was a record-breaking afternoon at Exeter City as they made seven wins a row, with a 4-0 win over Crewe Alexandra, to stay fourth in the League Two table.
City’s previous longest winning streak in a season had been six in a row, set in 1904/05 season and repeated in 1932/33 and 1976/77.
Added to that David Wheeler also scored for the seventh consecutive match, which broke a club record set by Henry Poulter in the 1932/33 campaign.
City manager Paul Tisdale made two changes from the side that beat Wycombe Wanderers 4-2 on Tuesday night as Ollie Watkins and Ryan Harley came back into the side at the expense of Joel Grant and Robbie Simpson.
However, Tis was then forced into another change before kick-off as Reuben Reid was injured in the warm-up and was replaced by McAlinden in the starting XI.
City got off to an excellent start as they took the lead inside seven minutes. The goal came from a perfectly-floated free-kick from Lloyd James that saw McAlinden go up for a header. The ball dropped down to the feet of Jordan Moore-Taylor who turned the ball home from a couple of yards out for his first goal of the campaign.
Watkins then had a great chance to make it 2-0 as the Crewe defence gifted him possession and he took the ball around John Guthrie, but Ben Garratt made a superb save to deny the City youngster.
Wheeler then had a backpost header deflected over before McAlinden had a good effort saved from Garratt.
City were dealt another injury blow on 30 minutes as Watkins was forced off with an ankle complaint. That seemed to give Crewe some impetus with George Cooper hitting the crossbar with a long range effort and then sending in a low free-kick that Jordan Bowery really should have turned home.
However, the half ended with City on top with Wheeler having a close range shot blocked and Moore-Taylor sending in another shot inches wide of the post.
City went close to doubling their advantage a couple of times early in the second half as a Craig Woodman free-kick forced Garratt into an uncomfortable save and then McAlinden looped a header just past the top right hand corner of the net.
However, City then needed a superb stop from Pym to keep themselves in front. The Grecians defence got caught out by a long ball over the top and Alex Kiwomya raced through on goal. Pym made an excellent block to deny his first effort on goal and then got up quickly to stop the Chelsea loanee from putting the rebound into an empty net.
It was a top-class double save from the 21-year-old shot stopper and earned a standing ovation from a section of the home crowd. From the resulting corner McAlinden then headed the ball out from under his own crossbar.
That terrific defensive effort was then rewarded a couple of minutes later as Harley chipped a cross to the edge of the six-yard box where Wheeler planted a header into the net.
It meant he broke Poulter, Roderick Williams and Alan Beer’s joint club record of scoring in six consecutive matches, by netting in seven straight games.
Ten minutes later and the former Lewes player had his second of the match as Simpson intelligent laid the ball to him on the edge of the box and he drilled an effort into the bottom corner.
Crewe boss David Artell made a couple of substitutions and one of them – Chris Dagnall – forced Pym into another top save, but City in the closing stages of the match were the ones pressing with McAlinden and Simpson going close to making it 4-0.
Crewe’s afternoon then got worse ad Charlie Kirk was shown a straight red card for a bad lunging tackle on Jake Taylor with eight minutes to go.
And City made the extra man count as, when a low cross from McAlinden was cleared to the edge of the box, Lloyd James curled a shot home from the edge of the box for his first goal in City colours.
Exeter City: Pym; Stacey, Brown, Moore-Taylor (Croll, 77), Woodman; James (Grant, 82), Taylor; Wheeler, Watkins (Simpson, 30), Harley; McAlinden. Subs not used: Olejnik, Tillson, Sweeney, Oakley.
Crewe Alexandra: Garratt; Turton, Guthrie, Ray (Bakayogo, 11), Nugent; Jones, Cooper, Hollands (Kirk, 75), Cooke; Bowery, Kiwomya (Dagnall, 67). Subs not used: Richards, Wintle, Ng, Ainley.

Saturday February 4th 2017 was a record-breaking afternoon at St James Park, as the Grecians thumped Crewe Alexandra to make it seven wins a row for the first time in a single league campaign, whilst David Wheeler became the first City player to score in seven consecutive matches.

City got off to the perfect start, taking the lead after seven minutes through Jordan Moore-Taylor, who latched onto Liam McAlinden’s nod-down to net his first goal of the season from close range

Ollie Watkins then had a great chance to make it 2-0 as the Crewe defence gifted him possession and he took the ball around John Guthrie, only for Ben Garratt to make a solid save to deny the soon-to-be EFL Young Player of the Year.

City were then dealt an injury blow on the half-hour mark, as Watkins was forced off with an ankle complaint, and his early exit seemed to give Crewe some impetus, leading to George Cooper slamming the crossbar with a long-range strike.

With the game in the balance at the interval, the second half started brightly for both sides, with Craig Woodman forcing an uncomfortable save from a direct free-kick, while at the other end Christy Pym had the crowd on their feet as he made a spectacular double save from Chelsea loanee, Alex Kiwomya.

Pym’s heroics at one end where then rewarded at the other, as Ryan Harley chipped a cross to the edge of the six-yard box where Wheeler planted a header into the net to break the record set by Henry Poulter in the 1932/33 campaign.

Not content with just that, Wheeler then bagged his second of the match as he picked up a pass from Robbie Simpson on the edge of the box, and subsequently produced a tidy drilled finish to fire the ball into the bottom corner of the goal.

If City weren’t already in control of the match, they certainly were when Charlie Kirk was shown a straight red card for an uncontrolled lunging tackle on Jake Taylor. The team then made sure to make the extra man count, as Lloyd James curled a shot home from the edge of the box for his first goal in City colours.

While the 4-0 victory was as impressive as it was deserved, the record breaking feats of the afternoon made it a truly unique game in the club’s history: 12 games unbeaten for the first time since 1964; 7 league wins in a row in a single season, beating the club record first set in 1905; and the toppling of a goal-scoring record that had stood for 84 years... records, it seems, are a bit like busses/play-off finals!

Man of the Match: David Wheeler 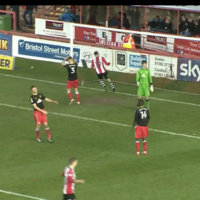 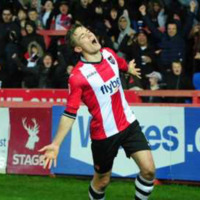