Exeter remained in the hunt for an automatic-promotion place with a well deserved win at Crawley in League Two .

Watkins, who scored in Exeter's 2-2 draw at home to Blackpool last Saturday, should have tested goalkeeper Glenn Morris early on when he fired over when well placed.

Midfielder Ryan Harley was also off target for the Grecians before Watkins put a left-foot shot over from just inside the area.

Crawley striker James Collins, on target in seven successive previous home games, had an opportunity to put his side ahead at the far post, but his header from a cross by Dean Cox lacked power .

Exeter goalkeeper Bobby Olejnik made an important save just before the break, keeping out an attempted lob by Enzio Boldewijn after Kaby Djalo's pass.

Watkins put Exeter ahead five minutes after the interval with his 13th goal of the season, bringing the ball down before scoring with a deflected shot into the corner.

The Grecians doubled their advantage in the 68th minute when, from a cross by Jake Taylor, Moore-Taylor slotted the ball home from the middle of the goal.

Crawley pulled a goal back in the last minute when defender Mark Connolly firmly headed in a cross from substitute Billy Clifford, but Exeter hung on. 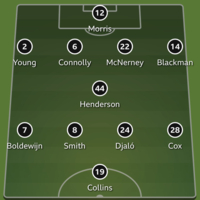 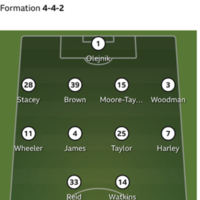