An injury-time header from Reuben Reid stretched Exeter City’s unbeaten run at St James Park to eight games as they battled back from two goals down to get a point at home to Blackpool.

The draw, City’s third on the bounce, crucially kept the Grecians a point ahead of the chasing pack in the race for a top seven finish come the end of the season.

City manager Paul Tisdale made four changes to the starting XI, with Jake Taylor and Christy Pym returning having missed the Stevenage game through suspension and injury.

There were also two changes up front as Liam McAlinden and Robbie Simpson started ahead of Ollie Watkins and Reuben Reid who dropped to the bench.

However, Simpson’s afternoon didn’t last long as he suffered a horrible-looking  ankle injury five minutes into the match looking to get on the end of a low cross from Ryan Harley. The 31-year-old striker had to be stretchered off the pitch and left the ground on crutches.

Moments later David Wheeler had the ball in the back of the net after he side-footed home a McAlinden cross. Unfortunately, for City, McAlinden had already been flagged offside.

Blackpool then took the lead with their first meaningful attack. Brad Potts had a shot from the edge of the area that was saved by Pym, but he could only parry the ball into the path of Colin Daniel who side-footed home from close range.

Blackpool then resorted to trying to slow the game down and frustrate the hosts, but still City had a couple of chances to equalise before the visitors made it 2-0.

The first was from a free-kick that saw Craig Woodman’s deflected effort end up behind for a corner and the second came from a Jake Taylor volley that was headed on target by McAlinden. However, Sam Slocombe made a good save for Blackpool.

Then on 39 minutes Blackpool extended their lead as Pym failed to get sufficient distance on a punch out of his six-yard box and Potts volleyed the ball into an unguarded net.

However, with six minutes of injury time to play at the end of the first half, City had plenty of time to pull a goal back before the break and did so. Jack Stacey played a starring role as he won a header and then took the ball around the Blackpool left back before crossing to the back post where Watkins volleyed home.

City started the second half well with McAlinden hooking a shot towards goal, but Blackpool started to get a grip on the game around the hour mark and, defending in two banks of four, frustrated the home side and limited them to very few chances.

City did have a strong appeal for a penalty turned down when Troy Brown was shoved in the back trying to get on the end of a corner.

Substitute Reid then had a great chance to level on 81 minutes as he got on the end of a Wheeler knockdown, but Slocombe saved his initial effort and then got up well to block the rebound.

However, the City striker was causing problems and headed another chance just wide on 85 minutes.

Therefore, it was no surprise to see Reid in the thick of the action again in stoppage time as he dived to get his head on the end of Watkins’ injury-time cross and extend the Grecians unbeaten run at St James Park. 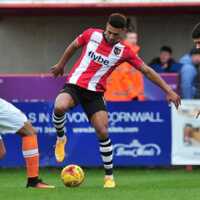 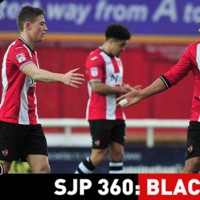