Wheeler, Reid and McAlinden on target in Exeter City victory

Exeter City scored two late goals to beat Morecambe 3-1 at St James Park and move up to fifth in the League Two table.

The Grecians took the lead in the first few minutes of the second half having had the lion's share of chances. However, they were then pegged back by a superb volley from Kevin Ellison and needed a penalty from substitute Reuben Reid to put them back in front before Liam McAlinden put the gloss on an excellent day by firing home with virtually the last kick of the match.

In a first-half of very few opportunities, it was Exeter who had the better chances in the opening period. Morecambe began the match brightly, enjoying most of the possession in the opening five minutes, but having soaked up some early pressure Jake Taylor managed to steal possession in midfield before hitting a shot that deflected off Dean Winnard and into the side-netting.

Taylor was at the heart of the action again on 23 minutes as he nutmegged Aaron McGowan before fizzing in a near post cross that David Wheeler flicked just wide.  Wheeler then had a close-range effort blocked after the ball had dropped kindly to him eight yards out following a failed acrobatic attempt from Taylor.

Joel Grant also looked lively in the first half and, after a crunching tackle from Wheeler set him in on goal, he fired an effort from 20 yards that Daniel Nizic, in the Morecambe goal, did well to get down to and stop.

Ollie Watkins then had an effort on target, following another good run from Grant, before Ethan Ampadu swiveled and fired an effort just wide a minute before the break.

At the other end, despite a fair bit of territory for the visitors, Christy Pym remained untested in the City goal going into the break.
It took the Grecians just two minutes of the second half to open the scoring as Wheeler flicked a corner towards goal that Nizic and the defenders on the line made a hash of trying to clear as the ball rolled its way into the net.
Man-of-the-match Grant then had a glorious chance to make it 2-0 when he weaved his way past two players before firing just past the post from 12 yards. Michael Rose then showed the visitors' frustration as he fired into the St James Road end from 35 yards.
However, when Troy Brown had to cut out a dangerous cross from Kevin Ellison the warning signs were there. And it was Morecambe's 38-year-old substitute, Ellison, that got them back in the match when a Paul Mullin cross found him at the back post and he fired a sweet, first-time volley across Pym and into the far corner of the net for a contender for goal of the season.
However, it was then City's substitute who took centre stage. Reid, who came on for Ethan Ampadu in the 76th minute, got City back in front as he played a neat one-two with Wheeler on the edge of the area before being brought down by Michael Rose inside the box.
Reid stepped up to take the spot-kick and fired the ball low into the bottom left corner. Then in the fourth minute of stoppage time - with Morecambe pushing for an equaliser - McAlinden slid into a challenge to win the ball in the box and then he took the ball around a defender before rolling a shot into the net to make it 3-1.
Exeter City:Pym; Sweeney, Brown, Tillson, Moore-Taylor; Grant (Holmes, 86), Ampadu (Reid, 76), Taylor, Harley; Wheeler, Watkins (McAlinden). Subs not used: Olejnik, James, McAlinden, Stacey, Croll.
Booked: Sweeney, Brown
Morecambe: Nizic; Duckworth, Edwards, Winnard, McGowan; Kenyon (Ellison, 58), Fleming, Rose, Wildig, Mullin (Turner, 77), Evans (Molyneux, 67). Subs not used: Roche, Wakefield, Murphy, Whitmore.
Booked: Kenyon, Edwards, Ellison, Mullin, Molyneux
Attendance: 3,991 (75, away) 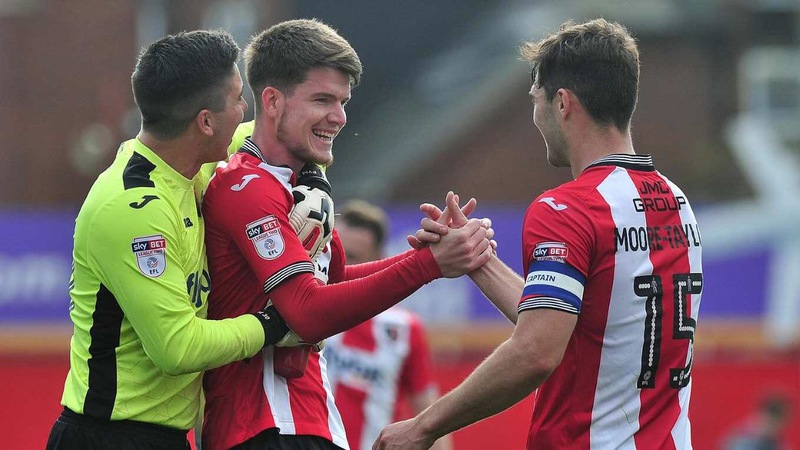