Exeter City will meet Carlisle United in the League Two play-off semi-finals after the Cumbrians battled back from 2-1 down at half-time to claim all three points at St James Park.

City went into the match having already secured their place in the play-offs, but knowing a victory against Keith Curle’s side would probably end their visitors chance of finishing in the top seven.

Grecians’ manager Paul Tisdale made one change to the starting line-up from the team that won 3-1 at Doncaster Rovers last time out to secure their spot in the play-offs.

City started on the front foot as Ryan Harley had an early effort at goal blocked. And it wasn’t long before the Grecians found themselves in front as Reid scored after nine minutes.

David Wheeler did superbly well to turn his marker to latch onto a ball from Ollie Watkins and played a quick ball to Reid and City’s No. 33 showed great composure to slot an effort past Carlisle United keeper Mark Gillespie.

Watkins then could have made it 2-0 three minutes later, but his fierce angled drive was well saved by Gillespie.

Jabo Ibehre then fired a warning shot as he put an effort over the top from a long throw in and then Jamie Proctor had an effort, blocked by Moore-Taylor, that looped onto the roof of the net.

Reid then had a glorious chance to make it 2-0 as the home side hit Carlisle on the counter, but after being played in on goal by Watkins he could not find a way past Gillespie for a second time in the half.

Then on 29 minutes the visitors were level when the referee judged that Jordan Moore-Taylor had pulled down Proctor in the area and Danny Grainger stepped up to thrash the ball home from 12 yards.

The game then swung end-to-end as Ryan Harley sliced a shot into the side-netting before Lloyd James headed off the goalline following a Carlisle corner.

However, the Grecians restored the one-goal lead just before the break when Harley’s corner was headed on by Reid for Moore-Taylor to send a stooping header into the back of the net.

Carlisle came out in determined fashion after the break though, and James had to be in the right place once more to clear a header, from a corner, off the goaline before Troy Brown got a good block in to deny Proctor.

Jamie Devitt then sent a low cross right across the face of goal in the 62nd minute before Proctor forced Christy Pym into a superb save down to his right.

Watkins hit back with a good effort City, having played a neat one-two with Reid, but then – with 15 minutes to go – Carlisle were level.

Substitute John O’Sullivan got the wrong side of Pierce Sweeney and was adjudged to have been brought down the City full-back. Grainger stepped up and scored his second penalty of the match.

Then, two minutes later, Carlisle were in front as a long throw into the box was headed home by Proctor. The Cumbrians then managed to see out the remaining 15 minutes to secure sixth spot and a match against City in the play-off semi-finals. 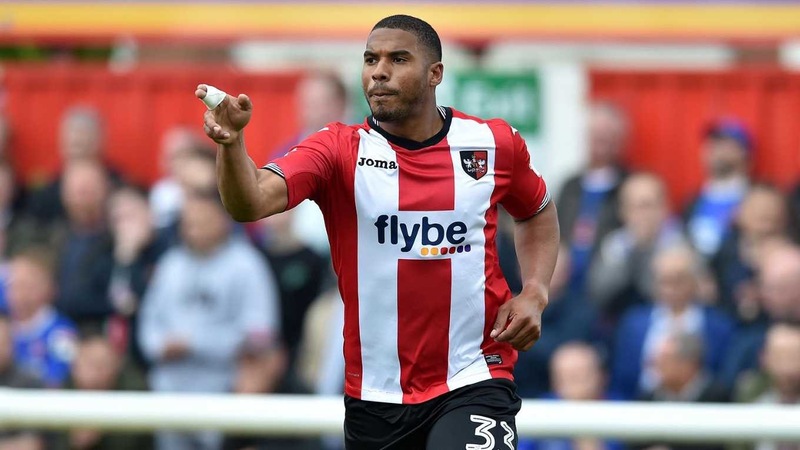