Back in the Conference it was a rarity for any football ground to be adequately signed. Our key navigational tactic was to "look for the floodlights". Just 2 seasons ago this backfired on route to Farsley Celtic where we mistook the magnificent Elland Road for our somewhat less magnificent destination. We drove past in awe, dreaming of the day our paths would meet. Little did we know that in just 2 years time we would playing them in League One.

The journey up to Leeds was fraught. The traffic was horrendous and I was certain that it would be impossible to get there for kick-off. Thankfully we made it with 45 minutes to spare. The crowds were simply astonishing. Sure I've seen big crowds for our trips to Wembley and Old Trafford, but never for a league match. Walking from the bus, past swathes of Leeds fans and with Elland Road looming in front of us, was simply overwhelming. The phrase "I want to go back to the Conference" was uttered by me in a state of complete bewilderment. Despite this I managed to cope with the turnstiles. No operators' necessary - your ticket was placed into a scanner and the gate opened to let you in. As the man behind me said, "how the other half live!"

Kick-off soon came around. Very early on in the game I was incredibly surprised by the lack of noise from the Leeds fans. Singing didn't appear to be part of their remit. That was until they scored. Beckfords 13th minute goal had them on their feet and the fans closest to us were giving us the "who are ya?" treatment. They should have known better for this instigated a rousing rendition of the classic "you only sing when you're winning", followed by "more noise at Farsley" and then the knock-out blow "we own our football club". To the latter they had no comeback.

With promotion to League One I had really hoped that after years of suffering at the hands of inept officials we might finally see some good ones. Unfortunately I'm still waiting. The lino appeared to struggle with the offside rule whilst the ref (the same one who sent Bertie off at Morecambe last season for the 'phantom' elbow incident) seemingly struggled to appreciate that there were in fact two teams in the game. He lacked any sort of consistency notably in relation to disciplining the players. Leeds fouls were either ignored or reprimanded by warnings whereas the most innocuous of City challenges invariably led to a booking without warning. It should come as no surprise then that the biggest cheer of the first half from the City fans came for the awarding of a City free-kick!

City started the second half well. Then Corr got sent off. I didn't see the incident so I couldn't really judge the decision but that didn't stop me going absolutely ballistic at the ref. The Leeds fans started squeaking to our right again. Cue chants of "we forgot that you were here". Buoyed on no doubt by the deafening chanting from the away 'corner' City fought back. James Norwood was brought on and displayed the skill that had impressed those who saw him pre-season. He is very similar to Mackie and is definitely one to watch! The ref continued his crusade to be crowned City fans least favourite referee ever with a cavalcade of questionable decisions. Then came a moment I won't ever forget. City, astoundingly, were awarded a free-kick. And what a free-kick it was! As Alex Russell's strike hit the back of the net the roof very nearly lifted off the away end. The sound was deafening, quite literally. Mid jumping around in celebration I appeared to temporarily go deaf in my left ear. I thought to myself "that's weird, I should probably sit down" before carrying on regardless. It's not every day you see City equalise at Elland Road!

For 15 minutes we lived the dream. Then Beckford scored. Strangely, for once, it didn't really seem to matter. With the final whistle came not sadness at defeat but a sense of immense pride and optimism. There was no "tearing apart", no "drubbing". To lose by just 1 goal when we had played over 30 minutes of the second half with just 10 men indicates to me that we have nothing to fear this season. Much like last season, underestimate us at your peril! 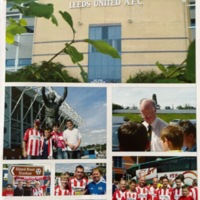 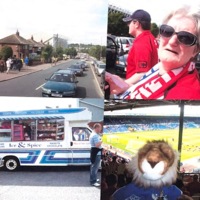