And in the Southern League
Clacton v City Reserves

St James's Park was stretched to its limits with a crowd of 20,000 inside the ground when the teams came out. They saw Exeter City make a gallant exit from the Cup competition when Luton Town, who were cup finalists against Nottingham Forest a year ago at Wembley, triumphed by 2 goals to 1 after being one goal behind Exeter at half-time.

The City fought well and with distinction against their 1st Division opponents, but were badly handicapped by an injury to Dale early in the game. Exeter's goal, the first of the match, came after 35 minutes, when Daniel sliced a shot by Stiffle past his own goalkeeper. Turner in the 67th and 80th minutes got both Luton's goals. But the City showed up better than anyone had expected against Luton Town, who fielded seven of their Cup Final team of last season, and for the greater part of the match Exeter called the tune. Both Luton's goals were from breakaways which followed raids by the City forwards, with the backs too far upfield. And the City had to carry Dale for most of the game, for after that early knee injury the clever left-winger was never really in the picture. Stiffle was Exeter's best forward, with Thompson outstanding both in defence and attack.


At Clacton in their Southern League match Exeter City Reserves beat Clacton Town by 4 goals to 1. Pulman got a hat-trick in the second half after Calland had opened the scoring in the first. Ledgerton equalised Exeter's first goal right on half-time. 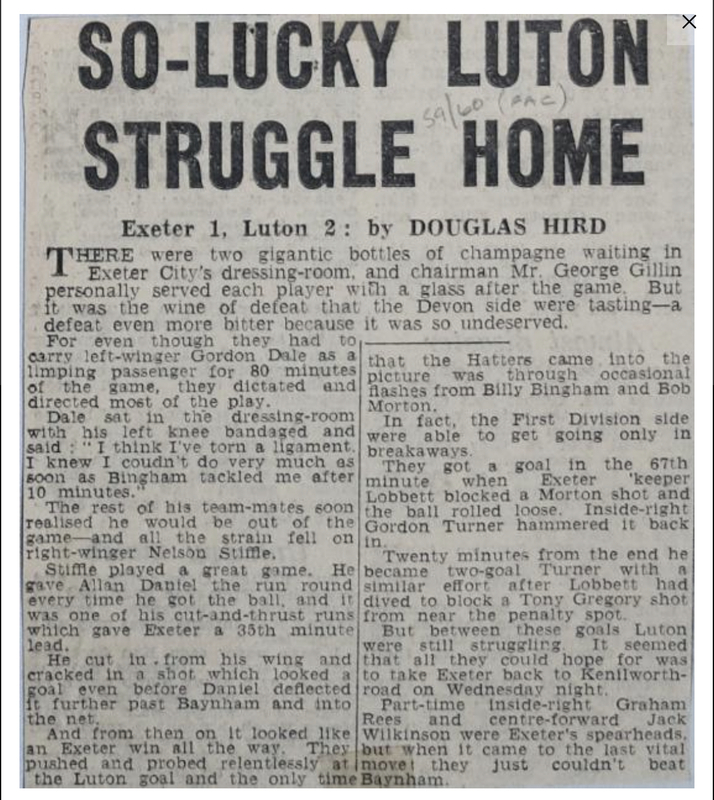